Can Iran easily restart the heavy-water reactor construction at Arak, after supposedly it filled with concrete?

Under JCPOA Iran was supposed to change the design of the Arak IR-40 research reactor to make it harder to produce (weapons grade) plutonium.

Iran announced in 2016 that they filled the core of the old Arak reactor with concrete.

Iran has removed the core of its Arak heavy-water nuclear reactor and filled it with cement, according to the country's Fars news agency.

Also that 2016 report was apparently confirmed by some Western sources:

U.S. State Department spokesman John Kirby confirmed the concrete has been poured into the reactor's central vessel. Secretary of State John Kerry said on Wednesday the core of the reactor had been removed and was to be filled with concrete and destroyed.

This month however, Iran threatened to restart work on the old heavy-water design at Arak within 60 days.

Also, in 2017 Iran apparently contradicted their previous (2016) claims regarding the status of Arak's old reactor:

In an August 22, 2017 interview on IRINN TV, Ali Akbar Salehi, head of the Atomic Energy Organization Of Iran (AEOI) and a member of Iran's nuclear negotiating team, reiterated the threats made by President Rohani on August 3, 2017 regarding Iran's ability to quickly revive its nuclear program at the point it was left prior to the JCPOA. He said that Iran will be able to start enriching uranium to 20% in the Fordo facility within only five days, and that it can also reactivate the old reactor in Arak, because cement was poured not into its core but only into a few external pipelines that are easily replaced. [...]

"We [actually] poured cement only into some of the reactor's pipelines, [pipes] several centimeters in diameter and two to three meters long. [We poured it] not into the reactor itself but [only] into the external pipes. If we are instructed to restore the former reactor and advance the former program that is unsuitable to [the present time] and is 40 or 50 years out of date, we will remove the front and back parts of these pipes and put in new pipes, which will take only several months. They made so much noise [about this], and we said nothing [at the time], out of humility, or if we said something nobody listened to us. That's why we have decided to present photos of the reactor [to the public].

Are there some published Western expert opinions how quickly can Iran bring back the old heavy-water reactor design at Arak to a level of readiness equal to the one before its JCPOA (partial) decommission? E.g. do they need a new heavy water reactor core? How long would that take to build? Or can they dig out the concrete of the old one (without significantly damaging it)? And how long would that alternative take? Presumably Arak was the subject of some Western inspections under JCPOA.

For reference, the Arak reactor is a heavy water reactor, similar to Canada's CANDU reactor.

The primary hurdle of a nation developing nuclear facilities is in the research and design phase. While some nations share R&D regarding these facilities, most do not share with Iran and other rogue states. However, Iran and the AEOI were able to find assistance in this regard. Now having the technological understanding, it's a simple matter of construction.

The mean construction time of a reactor core is 7.5 years: 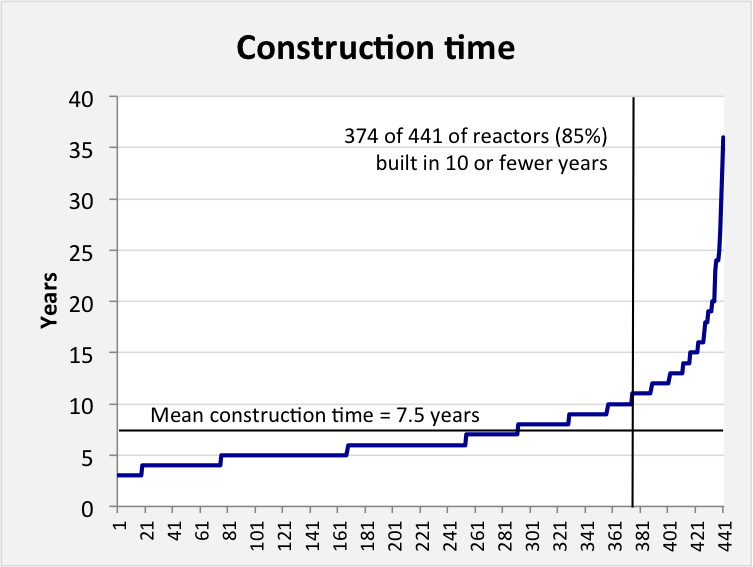 But that includes time to connect with a grid. If Arak is intended for research purposes, the total time is less. It's also reasonable to assume, given Iran's history with such things, that they may have already started construction on a replacement core, possibly even having built it simultaneously with the now-destroyed core as an insurance policy for the state.

It's also worth noting that Iran does have other nuclear facilities for power generation at Bushehr, and is already in the process of installing a new III+ reactor with the assistance of Russia's Rosatom. It's easy to speculate (and yes, it's simply speculation, but given the geopolitical climate in 2019 it isn't far-fetched, either) that Rosatom may be helping with Arak as well. Given that the Bushehr deal was brokered in 2014, there's been a good number of years already under way that production of a new Arak core could've taken place.

So, given that information, assuming Iran starts today, it could take a decade still to manufacture a new working core for Arak, and it could take as little as three years. It's also quite plausible that they already have a replacement core ready to install.

Not the answer you're looking for? Browse other questions tagged international-relations nuclear-weapons iran jcpoa nuclear-energy .

4
Can the EU maintain financial channels and Oil trade with Iran like they claim in their statement on reimposition of US sanctions on the country?
1
Can avoiding the Strait of Hormuz (ideally with a canal south of Kumzar) prevent further escalation of the high tensions there?