Virginia is not currently a member of the National Popular Vote Interstate Compact. The NPVIC is very popular with Democratic voters (a 2018 Pew Research Center Poll showed 75% of Democrats support eliminating the Electoral College) and with Democrats taking full control of Virginia state government, they potentially have the opportunity to implement it in a new state. 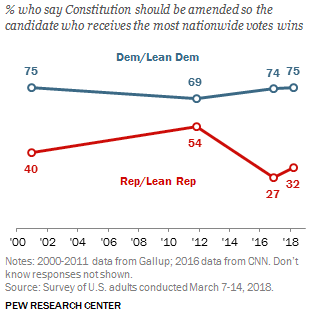 Has the Virginia Democratic party stated whether they plan to adopt the NPVIC?

nationalpopularvote.com is a good resource for this. This year a bill was introduced by three Virginia delegates HB 2422, but it was defeated in Privileges and Elections subcommittee in February.

Last year two of the same delegates (Mark Levine and Marcus Simon, both Democrats) introduced a similar bill, HB 99, that was also defeated in the same subcomittee the next month.

In 2017 the current Governor of Virginia, Democrat Ralph Northam, wrote a post on Medium where he explicitly supports the idea:

Finally, Ralph will support Virginia signing the National Popular Vote Interstate Compact to award all the commonwealth’s electoral votes to whichever presidential candidate wins the overall popular vote in the 50 states and the District of Columbia.

Not the answer you're looking for? Browse other questions tagged united-states democratic-party electoral-college na-po-vo-inter-co virginia .