Why are the Syria and Iraq wars viewed differently among Democrats?

Currently, the Iraq war seems to be viewed very negatively by the US "establishment" of the Democratic Party—for example, in both the 2016 and 2020 primaries, people have been attacked for past support of the Iraq war, and it seems to be an apparently strong line of attack, with them, with Joe Biden even falsely claiming to have opposed it (almost getting four Pinocchios). However, the Syrian war seems to be viewed differently. Intervention in it was done under Obama's presidency; however, he was against the Iraq war in 2002.

There seems to be a pretty clear opposition in the current Democratic Party to the Iraq war, but the intervention in Syria is supported, or somewhat weakly opposed, by major Democrats.

However, they both seem similar to me, in my limited knowledge. Both are in the Middle East, far from the US, and involve groups that want to overthrow a dictator unfriendly to the United States.

Why are these two wars viewed so differently by Democrats?

Unlike Bush who made regime change in Iraq a goal of the military intervention (calling Saddam an "ally of Al Qaeda", despite lack of evidence in that respect beyond the fact that Iraqi TV and Saddam publicly cheered the 9/11 attackers as bringing some kind of "deserved" retribution upon the US), Obama did not send troops to Syria with the overt mission to depose dictator Assad, although he (and the US more broadly) were largely not opposed to such an outcome.

Instead Obama has acted militarily overwhelmingly against ISIS in Syria. ISIS was perceived as a threat to the West more broadly. Perhaps ISIS is not perceived in the US as dangerous as bin Laden's Al Qaeda group was, at least as far as ISIS focus was more on European targets abroad, but framing/focusing the intervention in Syria as a fight against such a group clearly is going to resonate differently than regime change.

The Bush intervention in Afghanistan, although also leading to regime change there is probably a more apt parallel with what Obama did in Syria. (The Taliban were much more clearly/openly allied with Al Qaeda.) The US public kept seeing the Afghanistan intervention more positively over time: 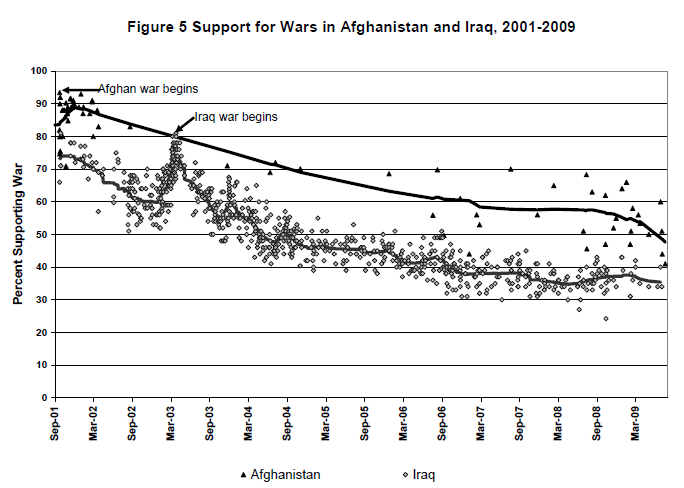 I can't find a similar/direct poll comparison with Obama's Syria intervention (right now), but hopefully this should give you an idea why the views on the interventions in/against Syria/ISIS and Iraq/Saddam differ.

In the United States, 65 percent of those surveyed in a separate tracking poll agreed with a statement that said “the problems of Syria are none of our business.” [...] Similarly, only 29 percent support the Obama administration’s decision to arm anti-government rebels in Syria, while 49 percent oppose that move.

So an Iraq-style [regime change] intervention in Syria was clearly unpopular in the US. On the other hand, just a year later, a US poll on strikes against ISIS found a completely different picture:

A new Washington Post-ABC News poll finds 71 percent of Americans support air strikes against the Sunni insurgents in Iraq, up 17 percentage points from only three weeks ago and up 26 points from mid-June, when the public split evenly on the issue.

Republicans are by far the most supportive of military action, with 83 percent in the Post-ABC poll supporting air strikes in Iraq, up 22 points from mid-August. But support among Democrats and independents has also grown by double digits in recent weeks, and two-thirds of each group now backs air strikes against ISIS. Support for air strikes in Iraq crosses almost every demographic line except the youngest age cohort, where those under age 30 split 44 percent in support and 46 percent in opposition. Clear majorities of men and women, whites and non-whites, and liberals and conservatives support attacking the Islamic State.

And the same poll found a similar enough US public opinion on ISIS and Al Qaeda:

So, what explains the public rapid rallying in support of another Iraq battle led by an unpopular President -- especially when 78 percent approved of withdrawing troops from the country in 2011?

Polls suggest the Islamic State's brutal tactics have hit Americans' terrorism nerve, with the group quickly gaining a reputation as threatening as al Qaeda. In the Post-ABC poll, nine in 10 adults see the Islamic State as a serious threat to U.S. interests, including 59 percent who call it a "very serious" threat. Even before the second of two Americans was reported to be executed, a Pew Research Center survey found 67 percent calling ISIS a "major threat" to U.S. well being, only four points shy of al Qaeda.

We entered a war with Iraq on false pretenses; there were no nukes, there was no eminent threat, and the Taliban/ISIS only became a threat in that specific country because we invaded. Saddam was a jerk, but he was a self-preserving jerk who toed the line. Having a whole bunch of people die and ten years of economic growth tamped down so we could play nation-builder was not a worthwhile use of our blood and treasure.

On the contrary, ISIS was already in Syria, we had a clear mission, it was a very successful mission, and we have had a total of three US deaths in Syria. For me personally, Syria is a mixed bag due to just how many innocents were killed by drones and missiles, but looking solely at its impact (or lack thereof) on the USA, there is no contest.

Democrats are just people representing the party. They are allowed to have their own opinions on this issue. As a party, they still differ, to understand this we need to look at the outcome of these wars.

Iraq war was successful. But the political altercations, opposition and avoidance of misuse of power in the US messed the whole ongoing operation in Iraq and this lead to an uncontrollable situation in Iraq. To add fuel to fire, there had been opposition in other NATO countries. (Blair in the UK)

After investigating the war prerequisites, it was clear that the attack on Iraq was made on false premises and some people's assumptions (Check the GreenZone movie). The whole investigation was done by the US Senate and the information is public.

The Iraq war created the perfect chaos and gave birth to many militant groups, which terrorized the whole region. One of those unorganized militant group is ISIS. Upon evaluation, Isis isn't just a militant group. Its a by-product of a failed military operation. The chaos created by ISIS throughout the world was magnanimous.

The Syrian war was mandatory, because of the failed operation in Iraq. The US had to engage because it had to. Everyone knows the costs (Money, resources and people) associated with war. Even though Democrats weren't interested in war, they had to engage/continue to engage in Syria. With ever-rising costs to fund war and the additional funding demanded to cover the intelligence costs to avoid attacks by ISIS proved futile. These expensive additional efforts werent successful. Despite additional & forced spending, the damage caused to the US's reputation was huge. In addition, the opposition from its people grew, dividing the whole nation.

The effects on Syrians were extreme. They were forced to migrate illegally into the EU Nations. This caused those nations to face societal consequences and it propagated throughout the EU nations.

If you are an individual of a senate and were forced to go through all these investigation documents and the chaos it created throughout the world, the indifferences among representatives grew. As some of the decisions were made by democrats, during their regime, some of them had a strong negative opinion but they do not openly oppose, however some do. Hence the differences in opinion.

Both are in the Middle East, far from the US, and involve groups that want to overthrow a dictator unfriendly to the United States.

The primary premise for war was "Iraq has chemical weapons, which (was planning to use) could be used against the US or its allies, to bring down the world order". Throughout the war, they couldn't find any chemical weapons. (As far as I know.) This continued (biased?) effort to locate the chemical weapons, based on their assumptions supported by misinformation from some people, caused the magnanimous fucked-up situation.

Not the answer you're looking for? Browse other questions tagged united-states armed-conflict syria democratic-party iraq .

14
Did the USA have a political agenda in Syria beyond simply the containment of ISIS?

14
Why is US supporting ISIS in Syria while opposing it in Iraq?
17
Are there advantages to my being registered as an independent in the US?
2
Why has Turkey invaded Iraq, and with what right?
9
What are the upsides or advantages to the USA of intervening in Syria?
2
Are caucuses less democratic than primaries?
0
Why is "poldering" seemingly such an alien idea in the US (and other countries)?
34
Why did Democrats in the Senate oppose the Born-Alive Abortion Survivors Protection Act (2019 S.130)?
5
Why is Turkey attacking the Kurds in Syria?
8
Why is Republican targeted messaging around socialism effective among immigrants from socialist or formerly socialist countries?