How does New Hampshire allocate its national Democratic delegates from vote share?

Google is currently featuring this data/answer, apparently based on an AP article which it doesn't link to... 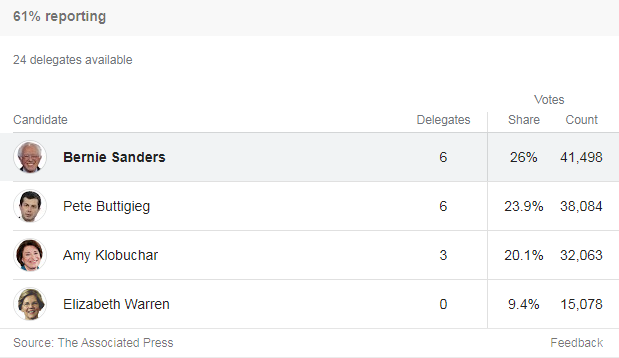 So, basically how does NH allocate its (Democratic) delegates from vote share? Are there (15%?) thresholds involved in New Hampshire as well? Since the system is (hopefully) less complicated than Iowa's, is there a simple measure of the popular vote that translates into an extra delegate in New Hampshire?

New Hampshire splits its 24 pledged delegates into four pools - one for each congressional district, and two statewide (this is sometimes conceptualised as three pools, with the statewide pools combined, since this makes the number of delegates in each pool equal). A candidate needs to achieve 15% of the vote in a given pools area in order to gain delegates from that pool.

Each congressional district is given eight delegates to allocate, and eight are assigned based on the statewide vote. The statewide delegates are split into two pools. There are five "At-Large" delegates and three "pledged Party Leader and Elected Officials (PLEO)" delegates. This can produce some odd results due to rounding, as can be seen in this example from Frontloading HQ

In New Hampshire under this scenario: At-large (5 delegates)

There are no extra delegates awarded simply for gaining the most votes.

Not the answer you're looking for? Browse other questions tagged united-states primaries democratic-party .

6
How exactly are the number of super delegates determined for the Democratic primaries?
3
How did individual Democratic Super-delegates vote at the roll call convention?
8
How does Trump's new national security plan differ from Obama's?
5
Are the partial results announced in Iowa consistent with prior polling in the state?
6
Has some candidate won the Democratic ticket without winning either Iowa or New Hampshire?
2
How pledged are pledged delegates in the Democratic convention?
2
Did New Hampshire pick the losing Democratic candidate three times in a row from 2008 to 2020?
6
Correlation between (household) median income and Democratic vote share?