Are there any polls explicitly measuring "quarantine fatigue" in Western countries?

There are numerous articles talking about how people are tired of staying in lockdown:

As Greece enters its third week since restrictive measures were first imposed to combat the spread of coronavirus, there is mounting concern that fatigue is setting in amid signs of people beginning to flout the policies.

Speaking to ANT1 TV, the government spokesman Stelios Petsas said the centre-right administration was now considering placing a time limit on the movement of citizens outdoors, the Guardian reports.

Are there any polls which attempt to track how much people are content with staying under lockdown?

The day after lockdown measures were implemented in the UK, YouGov conducted a poll of 2788 adults testing whether they supported or opposed the imposition of the measures.

They found that 76% of respondents strongly supported the measures, 17% somewhat supported them, and only a combined 4% opposed them in any way.

Just over two weeks later, on April 9th, they conducted another poll which asked respondents whether they would support or oppose lockdown restrictions being extended further than the initial three week period.

It found that while strength of support may have dropped slightly, the public was still overwhelmingly in favour of an extended lockdown, and that any drop in support was fairly negligible - combined opposition was found to be 5%, with combined support at 91%.

I think we can conclude from this that although there may be a small amount of quarantine fatigue given the slight drop in strength of support for the lockdown measures between March 24th and April 9th, the public still remains overwhelmingly content with the measures at the moment, and there is evidence that at least one constituent country of the UK may support a tightening of the lockdown measures.

Working with YouGov and ICL, the Institute of Global Health is publishing weekly international data on polling related to the COVID-19 pandemic. The full range of data is available on GitHub, but with regard to the specific question, about quarantine fatigue, the nearest question in their dataset is probably "Willingness to self-isolate", from which we can look at trend data to draw conclusions about fatigue. Similar to my previous answer, although the data from the last week in the data (Apr 13 - 19 at the time of writing) shows that some countries are clearly more willing than others to maintain isolation, there is still overwhelmingly broad support of lockdown measures. Notably China and India have lower figures, but respondents don't really go as far to say they are unwilling to stay in lockdown, rather that they are either 'somewhat willing' or 'neither willing nor unwilling' to stay in isolation.

"Under the direction of Prof. Dr. Cornelia Betsch, Heisenberg Professor for Health Communication at the University of Erfurt, the Robert Koch Institute is currently operating a "COVID-19 Snapshot Monitoring" (COSMO) together with other cooperation partners. Once a week, the consortium conducts a live online survey to determine how people subjectively perceive the risks of the COVID-19 virus, which countermeasures are known, and which of these are already being used or rejected. The aim of this project is to gain a repeated insight into the "psychological situation" of the population." (Translated with www.DeepL.com/Translator (free version))

According to Der Spiegel (04/10/2020), the latest results indicate the onset of disaster fatigue in the German population.

The first April poll for the ARD Deutschlandtrend in Germany shows 93% (-2%) in favor of contact restrictions, 6% (+3%) against. The questions were actually asked on March 30th and 31th, and it did not spell out against which previous poll the change was measured.

That being said, a slight drop in approval of the measures in absolute terms, but the number of those opposed doubled in relative terms.

Insofar, the answer seems no, even in Italy, but the figures seem to differ substantially between pollsters; March 19:

A poll published in La Repubblica newspaper found 96 percent of all Italians viewed the closure of most business and all schools and public institutions "positively" or "very positively" and just four percent said they were opposed.

While the measures are not as extreme as those taken in China's quarantine of Wuhan's Hubei province, they still seemed unimaginable for a Western democracy until this month.

and ... how the question is asked; on the same day:

A majority of people in both Italy and Spain (59 percent) and more than 40 percent of French people would be willing to tolerate the measures as long as deemed necessary, even if the lockdown lasts for longer than two months.

The Italy lockdown has been extended until May 3.

Yes, in effect. For example, the Kaiser Family Foundation (KFF) has set-up a tracking poll to measure attitudes regarding the lockdown in the U.S. The latest published results (April 24, 2020) indicate for example that 14% of Americans say they cannot continue following strict social distancing for another month, along with 3% who say they can't do it at all. 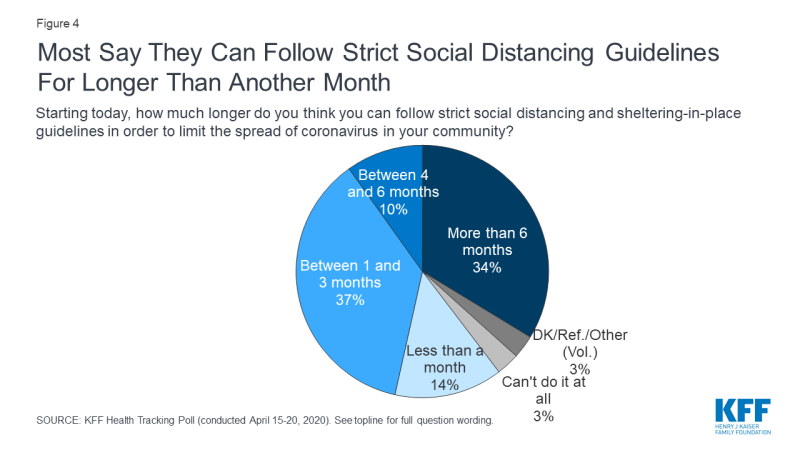 Not the answer you're looking for? Browse other questions tagged public-opinion covid-19 western-world .

0
What long-term options do politicians have for Covid-19 and what are their implications?