Why do BLM protestors continue after all four police involved in the killing of George Floyd are facing charges?

Why do BLM protestors continue to protest now that all four police involved in the killing of George Floyd are facing charges and police around the country are being held accountable (e.g. the 6 Atlanta officers who got arrested for police brutality)? I am wondering what tangible change is currently being asked for. Police departments around the country are already starting to take action against racism. What’s the next step?

Do you really think the problem is limited to those 4? Why on earth would someone sit on a handcuffed person's neck for 9 minutes, 3 of which that person having no pulse? with 3 colleagues watching? How were these people trained? How are they monitored for use of reasonable force? There is something seriously wrong with the level of violence US cops sometimes apply to people they interact with. Yes, black people are the biggest victims, yes black people are angry, and yes, black lives matter. But this extends to many victims of police overreaction. As a, white, tourist in the US, my car was once almost shot at because I did not have my lights on at dusk. We are all George Floyd.

It is high time there is a systemic change so that police are held accountable, and, more importantly, that police departments everywhere train their people not to use deadly force unless necessary.

Minnesota is suing its own police department. What there needs to happen is that police departments as a whole, not just their bad apples, get sued, heavily, when unreasonable force is applied, especially if it is shown that the officers carrying out those acts were mostly behaving in line according to an customary level of excessively violent response for a given department. Given big enough punitive awards, police departments will have to insure for the risks and insurance companies will be the first to point the finger at badly run departments.

Had Chauvin been on his own? Yes, putting him in jail would fix things. But look at the context - he was not worried about his behavior crossing the line, with 3 colleagues there. Look at the, white, guy who got swatted and killed about a few years ago. He was no threat to cops who were behind their cars and had their guns on him.

Look at the numerous reports of intimidation and physical violence against reporters. Does that sound like a well-run state, as envisioned by the Founding Fathers?

All US citizens, not just black people, would benefit from having less violent cops. Further down the line, even the cops would benefit from having a population that would trust them more. A lot of this really seems to boil down to a group culture of tolerance of violence that is totally unacceptable from people who are paid by the citizens to protect them. And it is not even doing the cops a favor: people react according to what the norm is with their peers. With better peers, Chauvin may or may not have killed Floyd.

So, yes, it makes sense to insist on real changes, because there is a long list of very similar events preceding this one, with no changes made.

Maybe your question should have been. Hey, now that Freddie Gray's cops are being put on trial, why bother being angry?. Or Michael Brown has had his justice served, so chill, will ya?

I actually don't dislike cops. I think they do a necessary job. It is sad, and disturbing, to see all the people calling them bullies and racists (the Freddie Gray killing involved at least 1 or 2 black policemen, out of 6). US citizens need their police, but they also all need better police.

But it is easy in their line of work to dehumanize people you are dealing with. Maybe you just arrest too many junkie muggers, of whatever color, and they get released. So you crack on the next person. Who knows? That needs to be recognized as an occupational risk and carefully managed so that it doesn't turn into these macho shoot first, ask questions later. And people who can't manage to keep their aggression down need to be fired. So should people who can't quite be neutral about which ethnic group a citizen belongs to.

And, yes, black people, much more so than whites, are very much the first in the line of fire and have every right to insist on changes. But unless you are really really not a type to be seen as threatening, say if you are the proverbial little old white lady, then BLM may actually be doing you a favor.

p.s. you know the one thing that's really driving this stuff? Cell phones cameras. 20 years ago, I'm sure it just happened and no one saw any evidence contradicting the official version.

p.p.s. are being held accountable isn't really strictly true. They are being charged and will be indicted. Whether they get convicted is an entirely different story and, on past experience, rather unlikely.

For example, in the F. Gray case, none of the 6 officers got convicted. Ditto M. Brown. 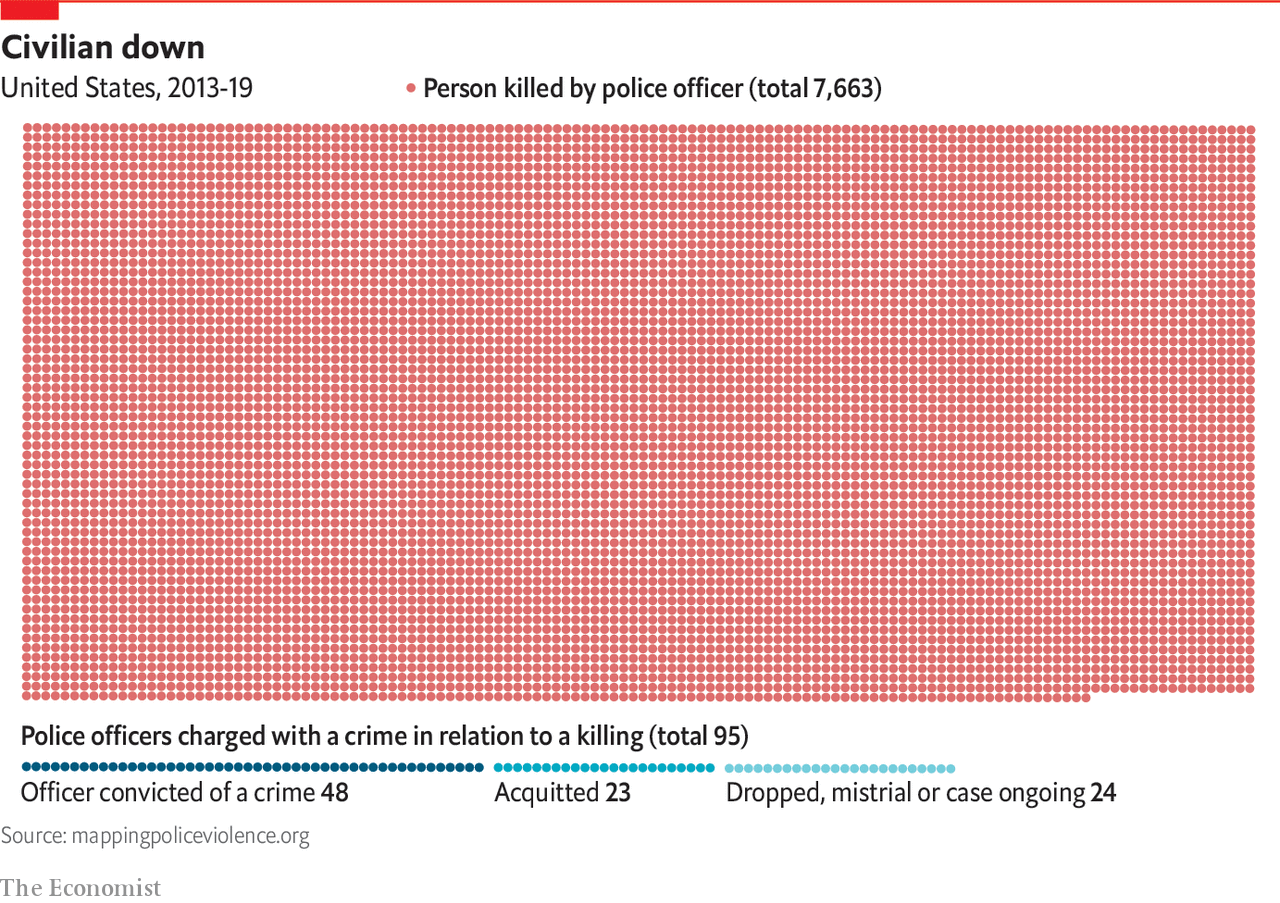 FWIW, Canada, with 10x less population, had 460 people killed by police, from 2000 to 2017, i.e. more than twice the above duration and we're less than happy with those numbers. My ballpark estimate is that's a rate per capita 3 or 4 smaller than the US.

tl;dr: The death of George Floyd was not an isolated incident, it's the larger system people want to change.

Police departments around the country are already starting to take action against racism.

I don't see that. I see some police departments in some cities making statements about racism. Not at all the same thing. People said policing would change after Rodney King. After Freddie Gray. After Tamir Rice. After Breonna Taylor. Yet here we are.

There have been some changes in policing in recent years, for example the widespread adoption of body cams, which have mixed results, especially when police can turn them off at will (sometimes in violation of published policies.) -- but there are also legitimate privacy issues to deal with. (A full discussion of the pros and cons of this one point is beyond the scope here.)

In any case, there is a growing public perception that this is a systematic issue which needs a systematic solution, not piecemeal changes in one city or another. Seattle's chief of police called for reform in 2018, but some of the worst of this week's offenses caught on camera have come from Seattle.

The killing of George Floyd was a disgusting act caught on video and widely published. The video produced a strong emotional reaction which spurred many people to action (to do something, anything, right now), and the emotion seemed to sustain itself. Soon, the focus of the protest moved almost completely beyond the facts of the case involving Floyd. Because Floyd was black and the officer (Chauvin) who killed him was white, it was taken as a starting point to talk about racism in society, and of the foundations of law enforcement. The agenda of this discussion has very little to do with pursuing criminal justice against Chauvin. Thus one cannot expect at this point for any developments in the Floyd case to influence the direction of the protest movement.

Not the answer you're looking for? Browse other questions tagged united-states protests police racism .

34
Why are opinions on the George Floyd sentence seemingly polarised along party lines?
3
What are the demands of the Black Lives Matter movement?

5
Why did John McCain fly all the way to Washington after brain surgery just to vote no?
81
Why is there a broad pattern of excessive force by police towards protestors in spite of international focus on this use of force?
18
Why do police unions support police officers that have committed gross misconduct, given that they tarnish the reputation of all officers?
21
Have there been any riots due to the 2020 US presidential election results?
34
Why are opinions on the George Floyd sentence seemingly polarised along party lines?
22
Why are national guards in states nowhere near the US Mexico border getting involved in border security with Mexico?
5
Are there precedents for treaties which only come into force once approved by the legislature of the all involved nations?