The 2020 DNC primaries came down to Biden and Sanders, who would be taking office at 78 and 79.

Prior to that, the oldest president in the history of the US was Reagan, who took office at 69.

This is a histogram of US presidents' ages when they took office (*): 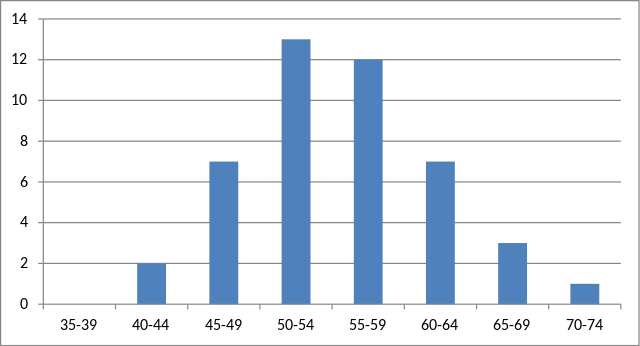 The median US residents' age has been increasing about 1 year per decade, since 1960s (a much slower trend), so that doesn't explain the sudden uptick in candidates' ages.

What's going on here? If someone had asked me in 2017, I'd predict the opposite societal trends, because of social media that worships youth more than old media (TV) did.

Two plausible explanations that I can think of:

but maybe there is something else.

Regardless of the outcome, the President inaugurated on January 20, 2021 will be "old". This is a one-time hiccough; the 2020 election will be an anomaly. When it comes to statistics, the best thing to do with anomalies oftentimes is to throw them out. A plethora of statistical techniques for detecting and rejecting anomalies exist because extrapolating from a sample size of one is a very bad idea.

Premise: Older Democratic candidates are favored, as they have a larger voter and political base that is likely to support them, when compared to younger candidates.

Evidence: Both Wikipedia and the United States Elections Project state that voters who are above 60 have higher attendance at elections (more than 60% attendance vs only 40% at most for 18-24 year old voters), while the OECD demonstrates that in the US younger voters are outvoted by older voters more when compared to other OECD countries (election turnout ratio is around 1.4 55+ voters per 18-24 year old voter). This establishes that older voters have more of an impact in terms of ability to influence an election result.

Furthermore, a research paper indicates that voters have a general trend of voting for a person whose age is similar to theirs ("The effect of age has been an overlooked heuristic within the voting behavior literature. Members of the electorate prefer to vote for co-partisan candidates who are closest to themselves in age") and that party affiliation at a young age will generally remain stable ("one’s “evaluative orientations” towards the political process and politics will tend to remain stable over a lifetime"). This may establish that older voters are likely to vote for a like minded candidate, with such candidate having a similar age to them.

Furthermore, a president would need at least a basic level of political support to implement their policies (such as Senate support for nominations). An older candidate would therefore need to at least be grudgingly accepted by Congress, which has an average age of 57.6 years for Representatives and 62.9 years for Senators, per the Congressional Research Service. It may be argued that a person of a similar age and viewpoint is more likely to back another person sharing those characteristics, in light of the material presented above.

Summary: We can summarize this as follows: Older Democratic candidates, having a voter base that is capable of outvoting younger voters and needing at the support of an older Congress to implement policy, would have an advantage that is primarily age related or deriving from age as a result of how people vote.

That's my theory. Could be nonsense. Discuss.

43
Why does US tend to have rather old leaders (> 60) while more and more European countries have young ones (<40)?