What is the maximum count of faithless electors Clinton can possibly get in 2016?

At the time of writing, it looks like Clinton will end up with 232 pledged electoral votes, and Trump with 306. So 37 electors would have to flip just for a tie.

My understanding is that some states have laws binding electors with either fines, criminal penalties, or the right to replace their votes if they don't vote in line with their constituents.

Assume Clinton's best-case-scenario: every elector would vote for her if their state's law permitted it. Are enough electors able to switch to change the outcome of the election?

First, let's clarify which states don't have laws that bind the votes of electors: 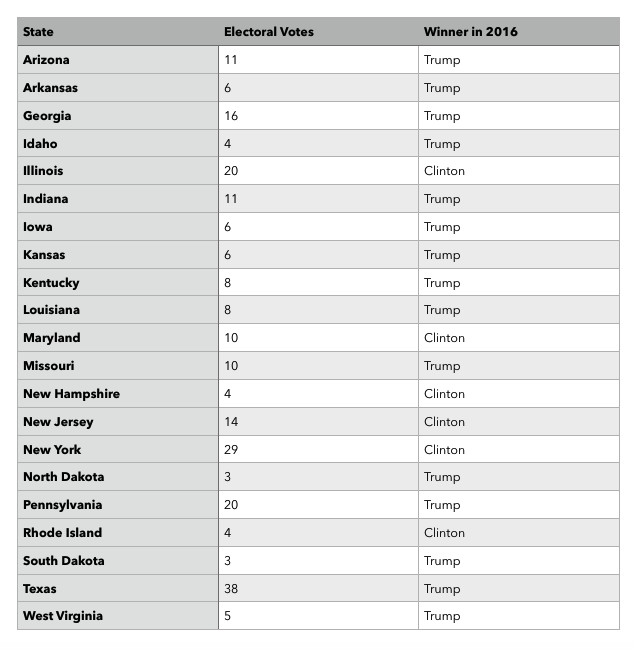 Now, let's eliminate those states that Clinton won, that leaves us with 155 electoral votes from states that don't bind electors and were won by Trump.

Since, Clinton will simply need 39 electoral votes to win a majority, it's mathematically possible. She doesn't even need all of them to be faithless. If all electors from Texas and Iowa votes for Clinton, then she would already win with 276 electoral votes.

That being said, it doesn't mean that it's feasible, there isn't a large chance of this happening, since 39 out of 538 is more than 7%. Requiring 7% of electors from the electoral college to be faithless is unprecedented.

4
Could Hillary Clinton become Donald Trump's Vice President?
-2
Where are the missing 16 delegates in the US presidential election?

33
In the Electoral College, why can electors vote in contrast to their pledge ('faithless')?
12
Are state laws restricting electors' votes constitutional?
13
What would happen if the same person were elected both President and Vice President?
13
Can faithless electors be grounds for impeachment?
2
What's the greatest number of faithless electors that the US experienced in a single US election?
9
In the event of a Presidential candidate's death after the printing of ballots, would the Electors of certain states be able to vote at all?
12
Why is there a difference between US election result data in different websites?
6
What penalties if any can be imposed on faithless electors specifically from Arizona, Nevada, Michigan, and Wisconsin?
0
Why may one be "faithless" if "winner-takes-all" is already applicable?