What's the justification of the bill? (e.g. a high level breakdown €5bn for this, for that etc.)

This document published by the Centre For European Reform details the major parts that the bill is made up with.

The main parts of the bill are unpaid budget appropriations (basically the EU’s credit card); unused national allocations of investment spending, which Britain approved for the 2014-20 period; and the cost of the pension promises made to EU officials. The obligations are partly onset by flows of money back to Britain from its share of assets, budget receipts and the payment of the UK rebate.

In my answer below, I will detail some of the major parts of the Brexit bill.

This is mainly added from EU spending on projects that are approved and paid over a period of several years.

This costs the UK €63.8 billion and is retirement benefits for EU officials. The UK would have to pay all UK nationals working within the EU institutions which would cost €80 million this year.

However, the EU Commission wants the UK to pay pensions for all EU officials, not just British nationals, since they all worked for the EU when the UK was a member. According to the EU consolidated accounts, it will cost up to a full €63.8 billion.

The Commission will seek to secure Britain’s share of funding for those commitments that are seen as legally binding, either because they are in multi-annual allocations, or arise from contracts that have already been signed.

Overview of the Brexit bill calculations

(page 10; from the same document linked above) 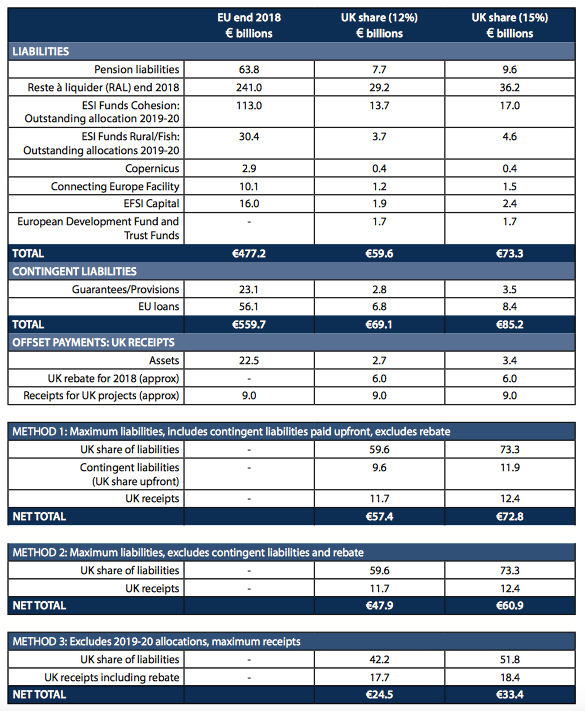 33
Why the snap election?
4
What is the nature of "Brexit negotiations"?
7
Why is it so hard to compute the EU-UK divorce bill?

14
Will the British Parliament prevent "Brexit"?
9
What is the rationale behind aiming for reduced immigration through Brexit?
9
What's Rees-Mogg's constituency, socioeconomically?
44
Why did the EU agree to delay the Brexit deadline?
76
What are the arguments in favour of Brexit?
31
What is the strongest case that can be made in favour of the UK regaining some control over fishing policy after Brexit?
6
A paradox at the heart of the Brexit argument
6
How did the Asians vote in the "double digit" Asian-minority areas in the Brexit referendum?
2
Why are political speeches published in advance?
15
What's the deal with the Irish border now, exactly?