Differences - “national measure adopted by the host state” vs. “a diversity of national regulations”

How do 1 and 2 beneath differ?

Under the (modern) international model,27 each State contractually commits itself to limiting its external sovereignty by opening its external borders to foreign goods, while it fully retains internal sovereignty over ‘its’ national market. This idea has become known as the principle of ‘host state’ control. It allows the importing – that is: the host – state to impose its domestic laws on foreign goods; yet it must not discriminate against imports. The prohibition of discrimination quintessentially requires States not to establish a set of rules that distinctly apply to imports. Within the international model, the frame of reference for discrimination is always the ‘host state’. Discriminatory effects must flow from [1] the national measure adopted by the host state; whereas a ‘discrimination’ flowing from [2] a diversity of national regulations is not covered. The constitutional demand behind the international model is the full assimilation of foreign goods under host state rule. They are entitled to ‘national treatment’ in all respects – but nothing more. 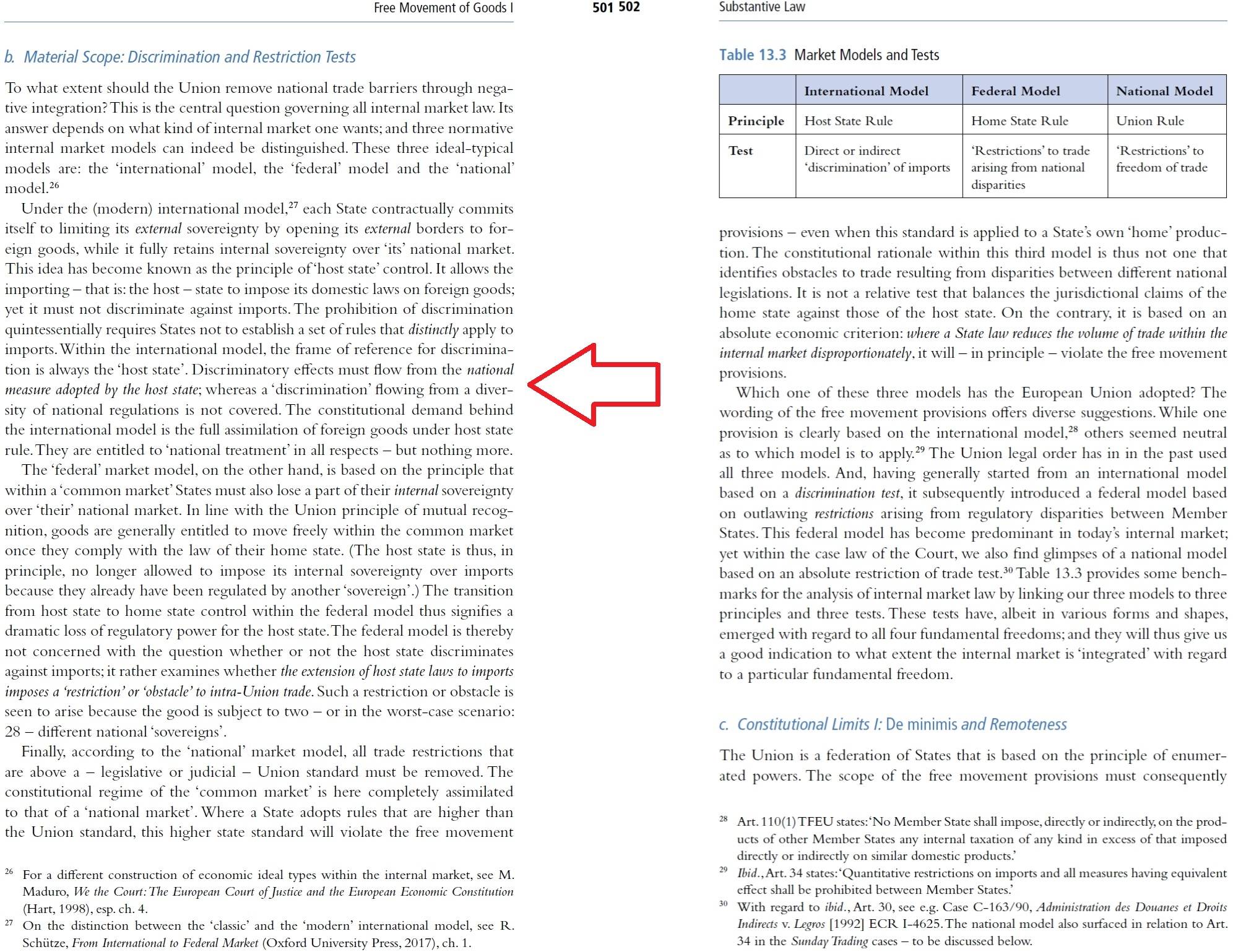 This is saying that countries in the European Union's free trade area can't pass laws like "This product cannot be imported from other EU countries." These would be "the national measure adopted by the host state".

But they can pass laws like "Beef from cows fed brain material cannot be sold." These would be "from a diversity of national regulations". This could have discriminatory effect. Some countries may allow farmers to feed their cows a protein supplement that may contain brain material. Those countries may end up unable to export to a country with this kind of rule.

In practice, it is not always clear what the difference is. This ends up being part of the rule making that the EU does. They allow some rules while disallowing others. In theory, the rules they allow discriminate only incidentally and the rules they block discriminate intentionally. But the line is not always clear. The exporting country may not agree with the EU decision, even as it is forced to abide by it.

This particular example is loosely based on the mad cow disease crisis. I say loosely because I did not try to refresh my memory of the details. But this is the basic idea. The United Kingdom was unable to export beef for a period of time because it could not guarantee the meat was not tainted to the satisfaction of other countries. The EU said that this was a real health concern and not just an attempt to block imports from the UK.

I don't have an example of a law that was blocked. Hypothetically, there could be a certain type of cow that only exists in the UK (or whatever country). A regulation might block that type of cow from sale. The EU might determine that the only reason for that regulation was to block the import of that type of cow, as those cows would not be native to the country with the regulation (in this hypothetical example). The EU might then block the regulation as having no purpose other than to prevent imports. This example is entirely made up, so please don't get caught up in the details.

2
Are there any whistleblower protection regulations in the EU?
34
Can a state be forced to leave the European Union?
9
Can the same individual be MP in a national and the EU parliament?
4
A national electorate protests not against its government directly, but rather via the European Parliament?
3
Do parliamentarians of the European Union usually have the same political views as their colleagues in national parliaments?
8
No-deal Brexit and Irish border; can third countries transit through Republic of Ireland?
4
Are MEPs intended to vote in the national interest, regional interest, EU interest, or some combination?
1
How do export restrictions help domestic market and national production?
4
Brexit deal and the EU national governments