How has the Scottish Government's handling of the COVID-19 pandemic differed from that of the UK Government?

According to a YouGov poll published in May, 74% of Scots think that the Scottish government is handling coronavirus well. Notably, this included 70% of 2019 Scottish Tory voters. 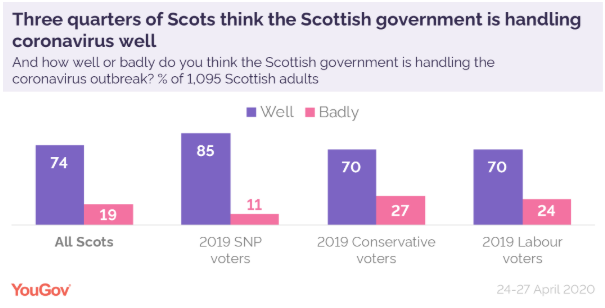 This appears to have remained the case a month later - despite approval of the UK government's handling of coronavirus sinking to a new low point on June 3rd, a large majority (44%) of GB adults said that they felt that the Scottish government had handled the pandemic better than the UK government (14%). 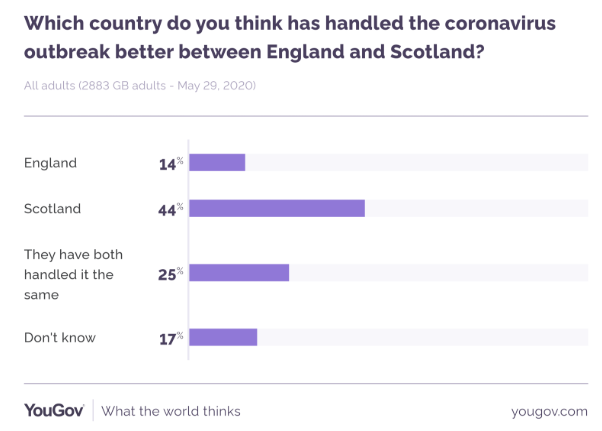 What differences exist between the two government's responses to the pandemic that have served to cause such a difference of opinion of their handling of the crisis?

An example of a difference is that Scotland, and the other devolved parliaments, declined to ease the lockdown measures when Johnson announced that.

The first article I found when I searched for stories about that is from Press and Journal which seems to be a Scottish newspaper. https://www.pressandjournal.co.uk/fp/news/politics/scottish-politics/2227436/coronavirus-nicola-sturgeon-says-scotland-will-not-follow-englands-easing-of-shielding-rules/

There was widespread criticism of the initial response from Westminster. Dominic Cummings' trip and Johnson's failure to do anything about it brought more criticism, even from usually staunch Tory supporters like the Daily Mail. https://www.theguardian.com/media/2020/may/25/daily-mail-cummings-challenge-uk-pm-conservative-newspaper-boris-johnson

A Scottish Convervative MP resigned from his position as a junior minister over the issue : - https://www.scotsman.com/news/politics/douglas-ross-scottish-tory-mp-resigns-over-trouble-dominic-cummings-lockdown-trip-2864455

Scotland's Chief Medical Officer was also caught breaking the lockdown rules and resigned in contrast to the general line from the Conservatives that Cummings did nothing wrong based on what many saw as spurious and convenient justifications. https://www.euronews.com/2020/04/06/coronavirus-scotland-s-chief-medical-officer-resigns-after-breaking-lockdown-rules

Finally, the announcement of easing restrictions was seen by some to primarily serve to distract people from the Cummings issue and when Scotland immediately declined to follow suit those who were suspicious of Westminster's timing likely saw Scotland as prioritising public health over political maneuvering. https://www.theneweuropean.co.uk/top-stories/lockdown-announcement-to-distract-public-from-dominic-cummings-1-6676741

All this is just one issue really. There are likely other differences that people closer to Scotland can list. All the links here are the first ones I found, I'm sure there are better articles out there.

Not the answer you're looking for? Browse other questions tagged united-kingdom healthcare covid-19 policy scotland .

11
What are the benefits to the rest of the UK from Scottish independence?
9
What is the significance of the WHO characterising Covid-19 as a pandemic?
36
What is the rationale behind delaying the imposition of more radical Covid-19 countermeasures?
46
During the COVID-19 pandemic, why is it claimed that the US President is making a trade-off of human lives for the economy?
24
How has the handling of the coronavirus outbreak (CoViD-19) affected Donald Trump's approval ratings?
5
Has the membership of SAGE during the COVID-19 pandemic been published?
6
Are there full details on why the UK Government has stopped reporting how many people have been tested for COVID-19?
1
Why has the response from the Thai government to the third COVID-19 wave been much more measured than at the beginning of the COVID-19 pandemic?