Has Lithuania completed its border fence with Russia (Kaliningrad)? If so, what is the length of the fence?

There were news (and interviews) in 2017 that Lithuania was building a (2m tall) border fence with Russia's exclave of Kaliningrad. Wikipedia's article on this is woefully out-of-date as it only says Lithuania had "announced plans", although you can see in the DW interview that they were advanced as far as planting poles for the fence in at least on region.

There's also some confusion (at least in my mind) as to the length of this fence. Wikipedia says the Lithuanian-Russian border spans 275 km. But one Lithuanian article from late 2017 said the fence had been (declared) completed "after six months of construction", but that it span only 40 km. Furhtermore a BBC article from early 2017 said that "The fence will cover 130km (81 miles) of border, from Vistytis to the Neman River, which runs to the Baltic Sea."

Well, it's still not clear to me how "complete" Lithuania regards the fence, but according to FRA data of 2020, the fence that was built starting in 2017 is indeed still just 45 km long, but there is some kind of existing fence dating to 1999-2000 on further 71.5km on Lithuania's border with Belarus. Of some note, adding these two gives some 116km of fence, still short of the press announcements of 130km, so it's not [still] clear what the latter were about. (Furthermore, Lithuania passed a law on Aug 10, 2021 authorizing a 508-km fence with Belarus.)

Aside, this FRA table also has an insightful summary of other/similar fences at EU's borders, most of which have received little press coverage (as far as I recall). Latvia actually has a longer fence with Russia (on 93km, build 2015-2019) than Lithuania, and seemingly they also plan to expand it to about twice that length, according to FRA. 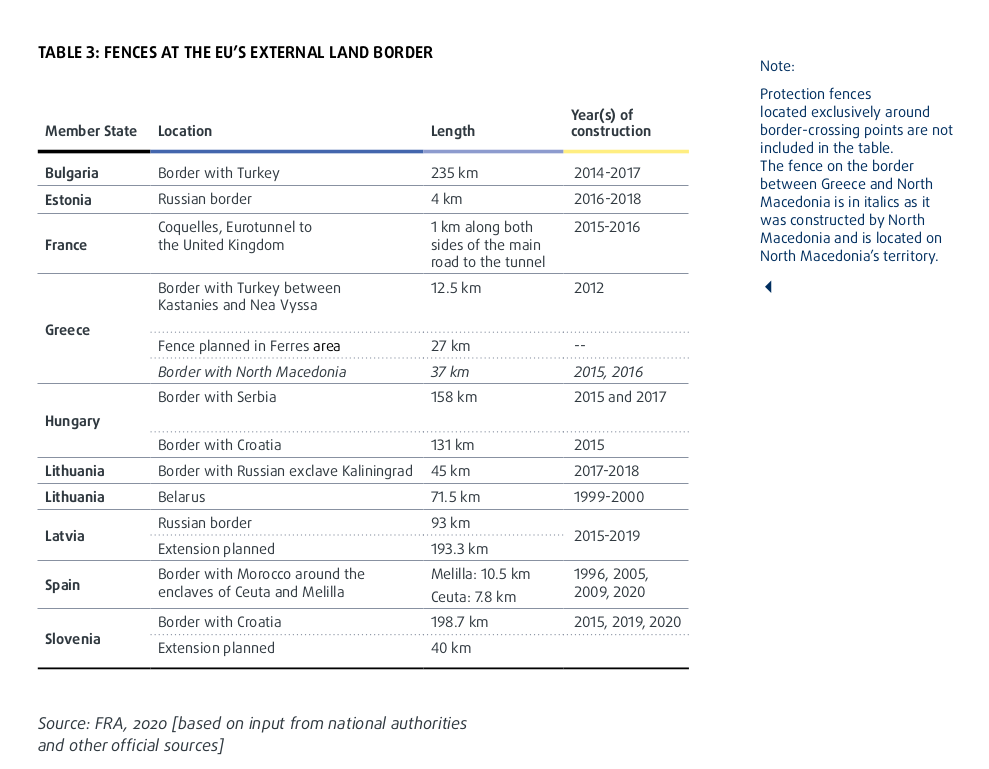 According to indirect sources, it's at least unfinished. At most - there is nothing.

Finishing of such a project would definitely be highlighted by lithuanian press. But what we are seeing if trying to find information: nothing later, than 2017.

So, presumably, project was silently canceled.

Also, there was some similar story with fence on Russian border

Not the answer you're looking for? Browse other questions tagged russian-federation borders lithuania .

1
What impact on urban sprawl is there when each major city has its own administrative division?
10
What is the rationale for hosting CIA secret jails by Romania and Lithuania?
15
How much of Trump's border wall has been completed so far?
5
How did Croatia join the EU without settling the border dispute with Slovenia?
23
What is the rationale of Lithuania allowing a diplomatic mission under the name of Taiwan, thus deteriorating the diplomatic relation with China?
4
How does Slovenia justify its 198-km border fence with Croatia, seemingly built after Croatia acceded to the EU?
5
Ukraine: compromising on the Sweden/Austria model. Has Russia indicated its position on EU membership?