Could a Conservative leader who loses the party's confidence vote refuse to resign as Prime Minister?

At time of writing, a vote of no-confidence in Boris Johnson is due to happen on the evening of 2022-06-06 between 1800 and 2000, as more than 54 letters (15% of all Conservative MPs) have been received by the chair of the 1922 committee. The BBC 'live updates' page notes that: "If Johnson loses, he will be forced to stand down as prime minister and the Conservatives will choose a new leader". What 'forces' him to do so?

A brief summary of the process of Conservative leadership change procedure is also listed over at the BBC News website. The article includes a helpful image: 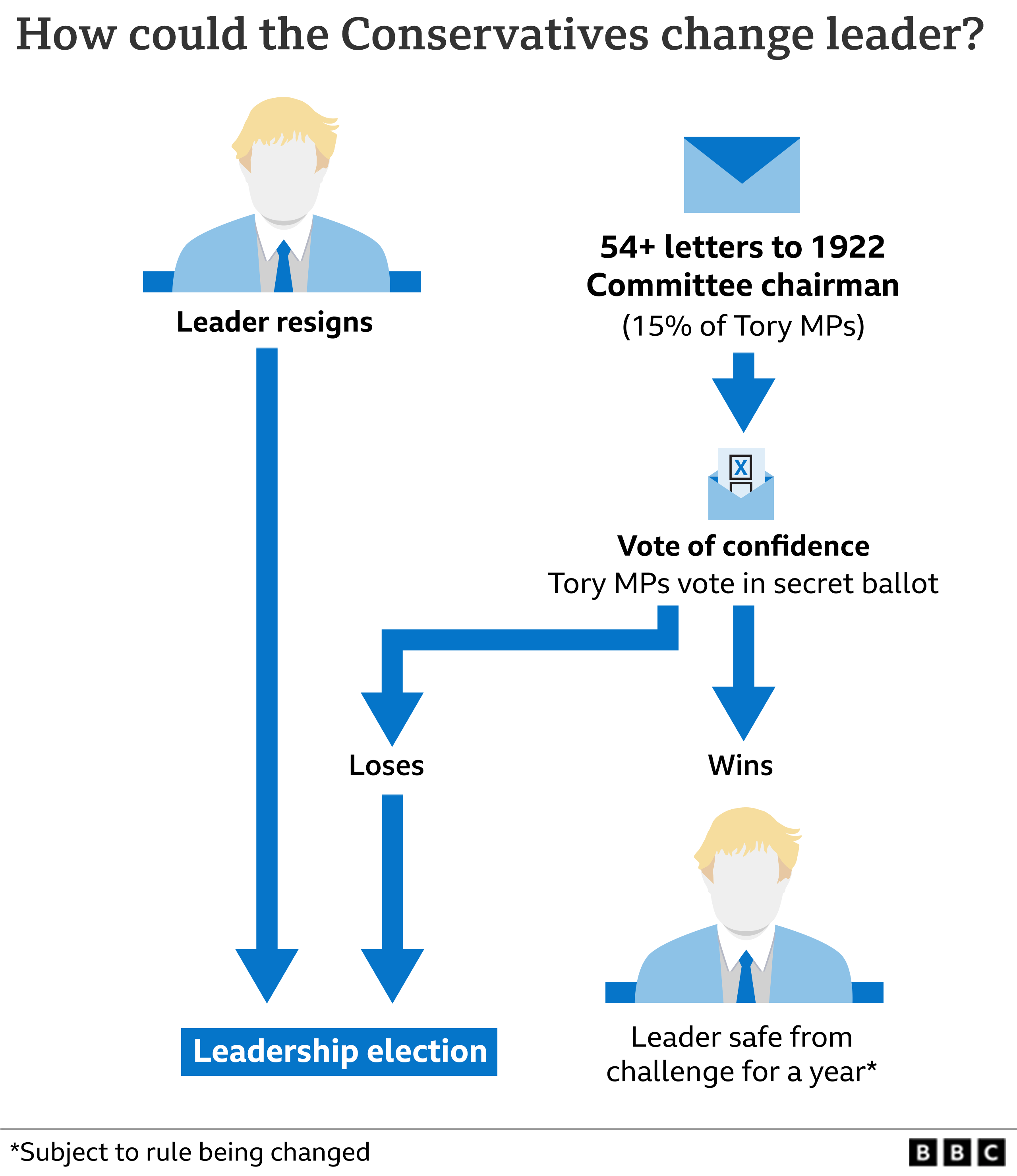 The current rules on Conservative leadership elections don't actually seem to indicate what happens in the "loses" outcome of the infographic, just that:

The current rules for electing the leader of the Conservative Party were introduced in 1998. A leadership contest can be triggered in two ways:

• If 15% of Conservative MPs write to the Chairman of the 1922 Committee saying they no longer have confidence in the leader of the Conservative Party, or

• if the current leader resigns.

I assume that what happens in such an eventuality is spelt out elsewhere.

There is an 'expectation' that someone who loses the party leadership would resign, as "the leader of the party that wins the most seats at a general election"; and "Prime Ministers hold office unless and until they resign" (PDF, page 21, section 2.8). Further parts of section 2 confirm "it is a matter for the Prime Minister... to judge the appropriate time at which to resign".

So, losing party leadership isn't like being fired from a job and escorted out by building security! Hypothetically, a Conservative Prime Minister could lose a leadership confidence vote, but refuse to resign as Prime Minister. Is there convention, written guidance, formal procedures, case law, or legislation which would determine or guide what would happen next? I appreciate that there is always the option of Parliament passing a motion, 'this House has no confidence in Her Majesty’s Government' (section 2.19 in linked PDF) which would mean a general election would take place after 14 days, though this is a catch-all rather than a procedure to handle a hypothetical intransigent PM who refuses to resign.

A Prime Minister who refuses to resign at the point where all conventions dictate that he should resign has some overlap with the previously-asked question, "Is there any mechanism to remove a UK Prime Minister on the grounds of 'insanity'?"

To borrow from part of my answer to that question: if there is general consensus that the PM must resign but is refusing to do so, there is only one option left: dismissal by the Queen.

This last happened in the UK in 1834 - though the Australian PM was dismissed by the Queen's representative in 1975; this was regarded as extremely controversial.

By long-standing convention, the Queen stays out of politics, and only exercises her powers on the advice of ministers; and so any action by an intransigent PM which would risk drawing her into having to use those powers of her own volition would be, at best, very unwelcome.

I would speculate that in this specific scenario, such action might not be as controversial as it could be, especially if it had the backing of the rest of the Cabinet, and if necessary Parliament too. Nonetheless, the conventions exist to try and avoid situations like this. Any PM that were to force the Queen's hand in this way would probably suffer severe reputational damage, if nothing else.

Formally the Prime Minister is chosen by the Queen. By (strong) convention, she chooses a Prime Minister on the advice of her Ministers, ie the Cabinet.

Now the Prime Minister is expected to resign having lost the Leadership and in doing so recommend that the Queen appoint the person who is most likely to command a majority in Parliament - his successor as party leader would be that person.

And that is what would actually happen.

However your question supposes that it doesn't. Ultimately parliament can decide. Because the new party leader can call for a no-confidence vote in Parliament which can trigger a general election unless the new leader is permitted to form a government.

One could imagine situations in which the party election was flawed in some way leading to disputes about who actually held a mandate. And in this situation, Parliament could decide to hold a general election, which should clarify the matter.

Such a scenario seems very far fetched - and Johnson isn't Trump - You can keep playing the game of "what if" and it leads ultimately to the Sergeant-at-Arms escorting the rogue Prime Minister to the Tower. In practice the leader of the Conservative party will know to within a few votes if they have a functioning mandate from the Parliamentary party, and if not they resign from the leadership and the Prime Ministership before Black Rod needs to get nasty.

As an example of when a losing PM didn't immediately resign. Brown, came second in the General election, although the Conservatives held a plurality, not a majority in Parliament. Brown remained Prime Minister until the Lib Dems entered a coalition with the Conservatives. Only then, when it was clear that he couldn't command a majority in Parliament, did Brown resign. Likewise, Johnson would remain as PM until there is a clear successor as leader of the party, and then resign.

The vote of confidence that took place this week was an internal matter to the Conservative Party, conducted privately under party rules - in a committee room of the House.

Strictly speaking it had nothing to do with the constitutional processes for the appointment or removal of a Prime Minister. It is only if a Prime Minister and his government lose a vote of confidence on the floor of the House that he/she is duty-bound to resign. "This House has no confidence in Her Majesty's Government" is the usual wording of the motion.

So, in theory, even if Boris Johnson had lost the party vote of confidence last Monday - he could have continued as Prime Minister - provided that the MPs who expressed no confidence were prepared to support him in a confidence vote in the House. This is not as ridiculous as it might sound because as things currently stand the Government would not win a motion of confidence if all 148 who voted against him in Committee Room 10 on Monday, voted with the opposition in the division lobbies. So his position as Prime Minister currently depends on the support of the Government in the House, of many who voted against the PM under party rules.

However, in practice, had Johnson not even managed a majority last Monday, the party rules would have required his resignation as party leader (not immediately as PM) and a fresh party-leadership election would have taken place. The winner of that election would then, almost certainly have been summoned by the Queen and asked to form a government.

8
Is there any mechanism to remove a UK Prime Minister on the grounds of 'insanity'?

3
Can the prime minister resign during a no-confidence vote?
28
What if nobody wants the job as leader of the UK Conservative Party?
15
How long can a vote of no confidence against the prime minister be delayed or avoided?
6
Could a British PM name the Opposition leader the next PM when they resign
25
If the UK Prime Minister suddenly dies, what happens?
5
Who becomes Conservative Acting Leader in the event of the Leader's death or incapacitation?
15
Over what period must the no-confidence letters in the leader of the UK Conservative party be received?
32
Could Boris Johnson have run for re-election in the July 2022 Conservative party leadership election?
8
Does anything prevent a no-confidence vote in the UK Government at this time?
6
Who exactly has the authority to expel members from the Conservative Party?