Why is an MP required to comply with a Three Line Whip?

I've just seen a post from MP for Tottenham and former Minister for Higher Education David Lammy on his Facebook account saying that he received a reprimand for not complying with Chief Whip on the division(s) of the European (Notification of Withdrawal) bill. 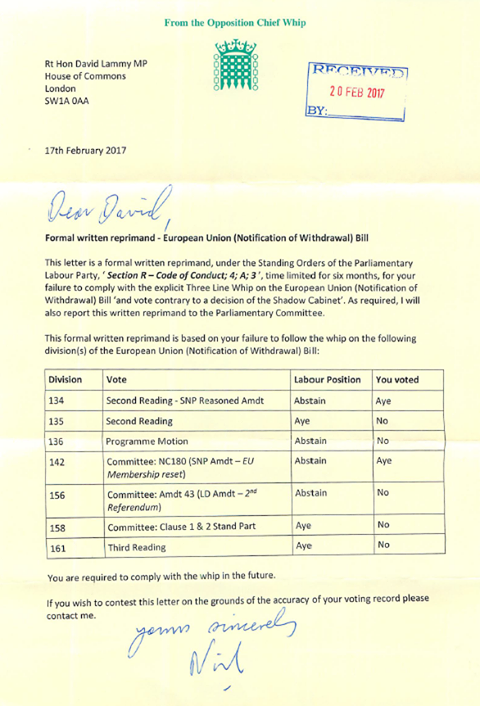 "You are required to comply with the Whip in the future"

Why would an MP be required to follow what a Three Line Whip asks of them? or are there special circumstances for doing so?

The use of "required" here is in the sense of "Do this or else...", not "You have no choice". Wikipedia has a pretty straightforward writeup of what a "Three line whip" means:

In the United Kingdom, there are three categories of whip that are issued on particular business. An express instruction on how to vote could constitute a breach of parliamentary privilege, so the party's wishes are expressed unequivocally but indirectly. These whips are issued to MPs in the form of a letter outlining the parliamentary schedule, with a sentence such as "Your attendance is absolutely essential" next to each debate in which there will be a vote, underlined one, two or three times according to the severity of the whip:

Not the answer you're looking for? Browse other questions tagged united-kingdom whipping .

2
What powers does a Whip actually have to force MP's to vote their way?
16
How do Whips enforce control over MPs in the UK Parliament?
2
Could a UK political party place a Three Line Whip on all votes in Parliament?
-5
Is the US developing an informal form of party discipline?

8
How uncommon is a Three Line Whip
4
Is there an official/unoffiicial record kept of 'Three Line Whips' in UK Parliament?
2
Could a UK political party place a Three Line Whip on all votes in Parliament?
1
Were three-line whips more (or less) common before the Fixed-term Parliaments Act?
1
Why have hardline Tory eurosceptics not resigned the whip to bring down the Government?
34
Why is Ian Blackford allowed to speak in the Commons while having crossed the line?
16
Has a former Prime Minister ever broken a three-line whip before?
22
What is the rationale for the United Kingdom statistics body not allowing black people to identify as having an English ethnicity in its surveys?
6
What is the fastest that an MP has broken a three-line whip?