Why does SNP support in Scotland seem disproportionate with actual support for independence?

In the recent 2019 UK election the Scottish National Party(SNP), an explicitly pro independence party, increased their share of seats up to 48 out of 55, a commanding majority.

However, recent polling has shown fairly weak results regarding independence. For example a poll from Progress Scotland showed only 40% support for leave and 51% for stay.There is a wonderful chart on the Wikipedia page which shows generally consistent support for remain though it may be sinking in recent years. Also, check out that page for many more poll results. 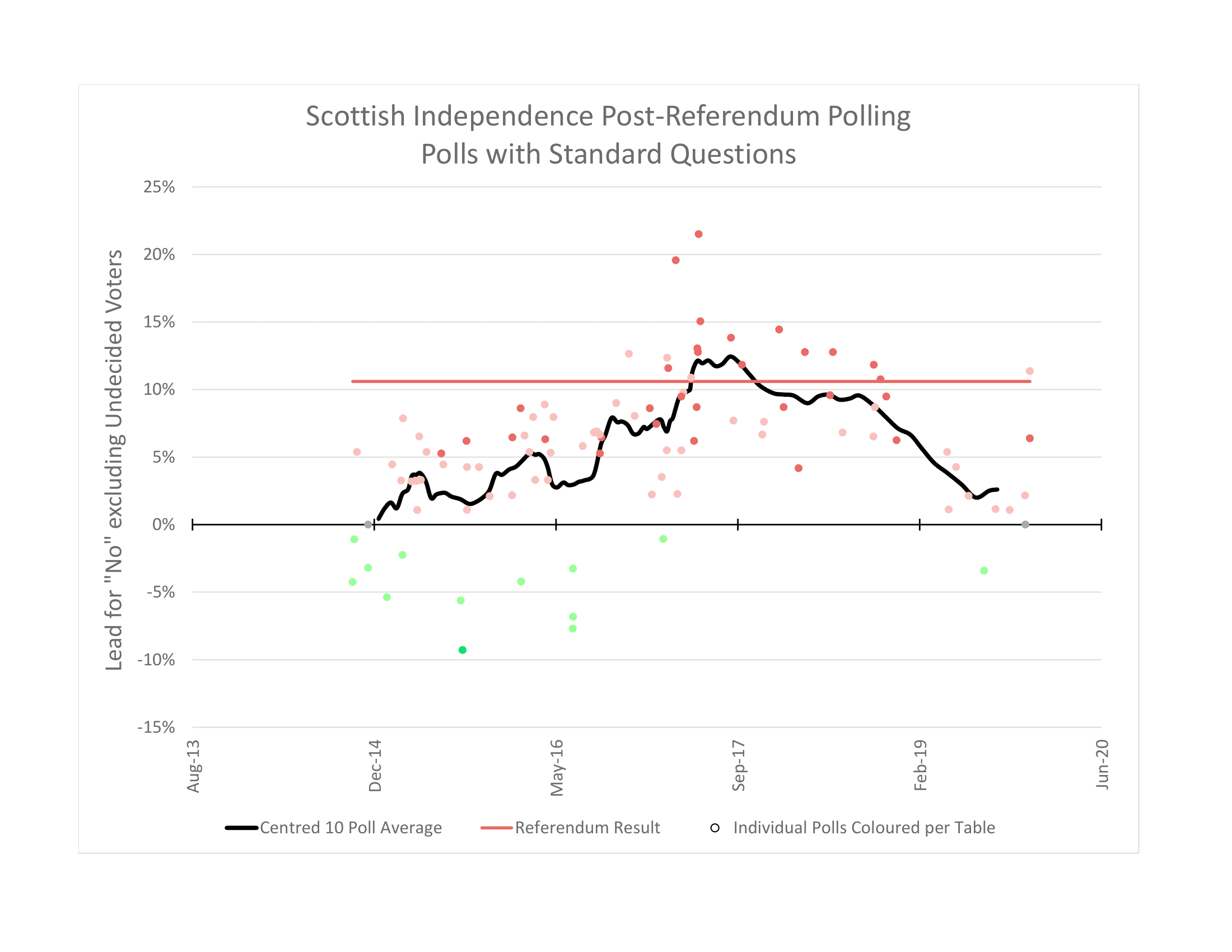 I did notice that the SNP only won 45% of the vote meaning this may just be a result of how seats are awarded. However, I find it hard to believe that the 55% of people who voted for all other parties are nearly completely united in the stay cause. Basically, is leave growing in strength as seen in the election results, or is remain still leading as seen in the polls, or am I just way off in my understanding of UK politics?

It is not. The number of seats is disproportionate, but not the level of support. This is a consequence off the First Past the Post system.

And in the Independence referendum.

So in the independence referendum, 45% voted yes.

Support for independence overlaps almost entirely with support for the SNP in Westminster elections in particular they are almost a single issue party.

In addition to Jontia answer regarding how 45% vote share has translated into so many seats due to FPTP and how the vote share figures links to the vote for independence.

The SNP is not a single issue party in fact they have a range of policies and their devolved administration has implemented extensive policies that diverge from the rest of the UK. (E.G. increases in taxes for higher earners, free university, additional increases to benefits and so on). They are also a pro EU party, other then the Lib Dems in Scotland they are the only sizeable pro EU party and Scotland did vote for remain.

The SNP are the only sizeable party in Scotland dedicated to representing Scotland, without being restrained by what the rest of the party is doing in other areas of the UK.

At no point has it been suggested that independence would be achieved without a further referendum. This means that voters who may not wish to vote for independence are free to vote for the SNP in the knowledge that they will have the option to vote against independence later on (this is assuming that parliament will even allow a referendum).

Further to the point about the affect of FPTP. It should be noted that FPTP often creates a situation where there are maybe 2-3 parties and often only 2 that might win a particular seat therefore voters are presented a choice and some will vote simply to keep another party out (the SNP have been targeting the Conservatives and trying to persuade voters to keep them out by voting SNP see here)

11
Is there any hard data on what factors motivated voters to switch from Labour to Conservative in the 2019 election?

11
What are typical consequences for a political party of losing an independence referendum?
4
Why did the Scottish National Party supplant Scottish Labour?
11
Under EU law, can Scotland remain or be re-admitted to the EU after Brexit while still a part of the UK?
20
What is the cause of the discrepancy between Scottish and English-Welsh results in the Brexit referendum?
6
Would the Spanish People's Party have the capacity to veto Scotland's entry to the EU while governing in minority?
6
Are party leaders typically from safe seats?
33
Why does the Scottish National Party object to being called nationalist?