Why do referendums use a binary choice rather than a numerical score?

In some democracies, citizens may be asked if they accept a law or the modification of a law in a "yes or no" referendum.

Most of the time, legal texts are complicated and specialized, so why does the government ask citizens to be absolutely sure in their vote of yes/no?

What difference would there be in a voting system where citizens were asked to give a proposal a numerical score between 0 and 100, where 0 would mean "no" and 100 would mean "yes"?

Has this kind of 'quantum voting' been used before, and if so, was it useful?

Because the system highly incentivises strategic voting. The voting system you describe is more commonly known as score voting, although it has plenty of other names. It's been used before in the USA - the example given by Wikipedia is the election of officers in the Utah Green Party rather than on a referendum or legislative proposal - this used a ballot as shown below. 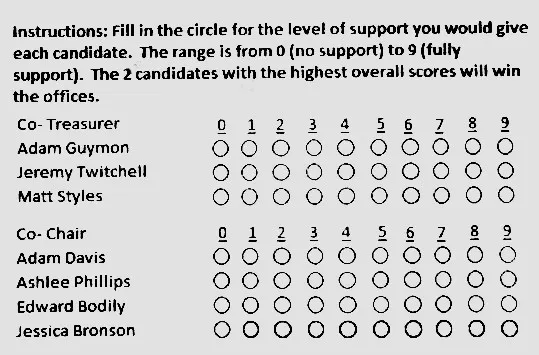 However, in his paper entitled Strategic Evaluation in Majority Judgement, Professor Jack Nagel explains how the voting system is highly susceptible to strategic voting.

For example, using the ballot above, a voter might believe that Guymon is worth a score of 8, Twitchell a score of 6, and Styles a score of 3. To increase the chance of Guymon winning, the voter might instead score Guymon a 9, and to decrease the chance of Styles winning, score him a 0. This is an example of "pairwise polarisation" - the least-favoured candidate being scored 0, and the most-favoured candidate being given the maximum score. In "complete polarisation", all candidates are given either the maximum score or the minimum score - which, Nagel argues, degenerates the voting system to simple binary approval.

It's not hard to see how this logic would apply to a referendum-style vote - even if a voter would sincerely give a proposal 80/100, this implies that they would rather the proposal pass than not, and they are incentivised to score the proposal 100/100 in order to maximise its chances. The end result is that the ballot degenerates to a simple "yes/no" vote.

In the specific case of a one-law referendum, which is what the question was asking about, what would be the purpose?

Let's pick a subject that will be polarizing and motivate people strongly, abortion for example. Now we have a referendum to allow it (Ireland did that recently, IIRC). Could be a referendum to forbid it, doesn't matter.

What does it mean to be 67% for abortion rights? Your brain is saying "well, I am 33% against too"? If you were voting on two different laws or two different political offices, then yes, you might "spend" 67% of your voting power to have your way on your most important subject, and 33% on your second important choice.

This logic might even work for 1 office and 5 candidates. 67% to your favorite candidate, 33% on your second-best choice. That makes sense.

But, again, for voting on one law and one law only, with a binary yes-no, what is the purpose of this quantified vote system? (please don't use quantum, it means quantified in discrete steps, not just quantified and poor word is overused ;-). You either want something or you do not. If you don't care - don't vote at all.

p.s. One valid reason for a quantified vote would be places that have laws forcing you to vote, even if you didn't care: voting 50/50 would essentially spoil your ballot, assuming there was no other way (such as voting blank or checking off both Yes and No). But that's a special case at best.

This answer is in the same vein as the one by CDJB, but explained a little differently. Consider the following voting system: There is a referendum, and everyone who votes gets to choose two things.

With this equivalence in place, it becomes easier to see why the incentives for voting are a little bit weird; although it seems like it, the number assigned to your vote in your voting system is not actually an expression of how much the voter agrees with the proposal. Rather, its an expression of the voter's confidence in their own vote. Obviously, a strategic voter who is looking to maximize the chance that their preferred outcome is chosen would always assign their vote a weight of 100.

But even if we accept for now that some voters would assign their vote a weight less than 100 because their vote "should" be worth less than that of others (maybe they believe they are less informed than the average voter), it's still not clear that this would actually produce better results. In particular, people who are likely to be confident and self-assured about their opinion would have a disproportionate impact on the political decision.

Referendums typically use binary choice because statistics, psychology and logic.

Because the outcome is binary

The proposition either passes or it doesn't. As others have said, the only rational numbers to use would be 0% and 100%, and that's because you can only prefer one outcome over the other (or you don't care either way and then abstain or void your ballot).

Even if an elector can have a nuanced opinion on the subject, the options are only to either keep the status quo or to have this predefined package of changes to it. If you want to be fancy, you can have a complex "value function", but it is only evaluated at two points.

More complex voting systems do exist, but they are only useful where there are more possible outcomes, such as an election among more than two candidates or the composition of a board.

One benefit of this mechanism is to prevent the government proposing a vague change to get approval, and then sneaking in something different once the approval has been given.

As a specific example, in 1999 there was a referendum to change Australia to a republic from a constitutional monarchy. This was rejected, in part because a significant number of voters did not agree with the proposed President appointed by parliament and wanted a directly elected president.

A vaguer 'Do you want to be a republic?' question, without a defined mechanism covering the powers and method of appointment of the president, may be considered and passed in a plebiscite but a referendum would still be required under to constitution to implement a change. This prevents a government using the vague question to justify appointing an all-powerful unelected president for life.

Not the answer you're looking for? Browse other questions tagged voting-systems referendum .

4
Do referendums lead to significantly different decisions than when decisions are taken by parliament?
13
Why not give representatives as many votes as they received in the election?
20
Are there examples of when Parliament decided against the results of a Referendum?
4
What are the rules of what goes into referenda in Switzerland?
8
Why do major referendums have a 50% threshold to change the status quo, rather than a higher value?
6
Why are referendums held? Are they not inherently anti-democratic?
18
Why are there no referendums in the US?
6
What is a "confirmatory" referendum in the context of Brexit?
81
Has negative voting ever been officially implemented in elections, or seriously proposed, or even studied?