What is this line of counties voting for the Democratic party in the 2016 elections?

Here is a preliminary image from The Guardian showing the individual counties during the 2016 election in the United States: 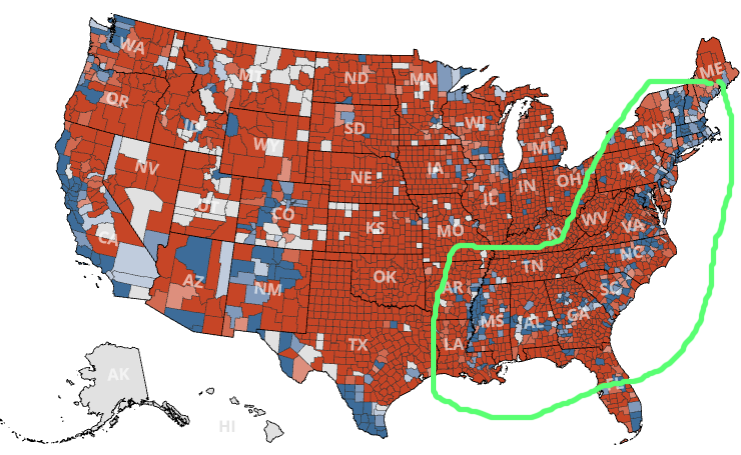 There appears to be a line of counties in blue, curving from Maine in the north-east to Mississippi in the south. Those counties would have voted for the Democratic party, but they are massively surrounded by Republican counties. Is there something in common between them?

As almost 80% of the African American voters voted for the Democratic Party, I think the correlation is both obvious and self-explanatory.

What should be held in mind is that this map is rather crude, having the darkest colour say "48.9-86%". This could explain why the "Democratic line" is slimmer than this map may implicate.

Together with population density, considering that urban areas tend to have a higher level of education and possibly better access to polls especially for African Americans that do not have much money (as registration and place of election are in foot-range and not miles and miles away), I would say there is a blend of effects, ethnicity being suprisingly strong in the indicated area.

A combination of the Black Belt and Northeastern region

What first appeared to be a long unbroken line of counties from north to south actually seems to be made of two major parts. 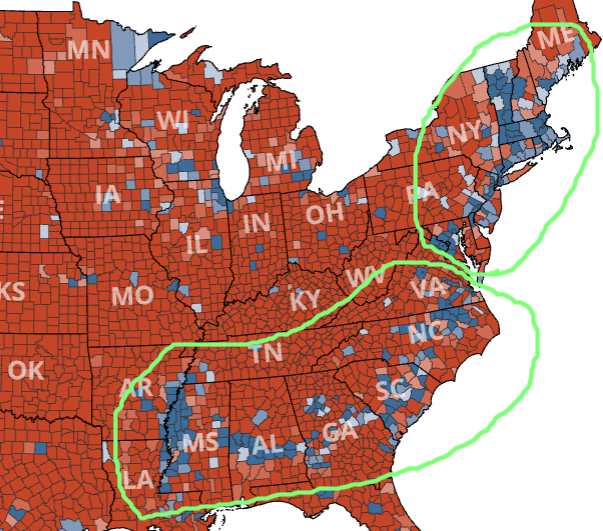 The blue counties north of Virginia are actually part of a larger area that also skirts the Great Lakes. The reasons why Northeastern United States votes Democrat (or used to) are complex and changing (it was mostly Republican before 1990), but it is unrelated to the rest of the curve.

The emergence of the Northeast as a potential Democratic firewall has been a long time in the making. The steady realignment of the South toward the Republicans, which rendered the party increasingly conservative, called forth a counter-realignment among moderates in the North.[11]

The voting patterns of the Northeastern region would require an answer of its own, but it is related to population density, education, urban centers and social and cultural differences between the North and South. However, this answer mainly focuses on the Black Belt.

The southern part of the "curve" is commonly called the "Black Belt":

There’s an arc of Democratic strength across the interior South. This is the old “Black Belt,” named for the fertile soil that gave rise to cotton plantations. These areas are still populated by a high percentage of African-Americans even 150 years after the end of slavery, and they’re predominantly Democratic today.[1]

The soil of the Southeastern regions is fertile and well-drained, making it ideal for cotton. The black population in this region today descends from the slaves that use to work the cotton fields.

Over time this rich soil produced an amazingly productive agricultural region, especially for cotton. In 1859 alone a harvest of over 4,000 cotton bales was not uncommon within the belt. And yet, just tens of miles north or south this harvest was rare. Of course this level of cotton production required extensive labor.

As Washington notes further in his autobiography, "The part of the country possessing this thick, dark, and naturally rich soil was, of course, the part of the South where the slaves were most profitable, and consequently they were taken there in the largest numbers. Later and especially since the war, the term seems to be used wholly in a political sense—that is, to designate the counties where the black people outnumber the white."[2]

The Black Belt on election maps

I went back to previous elections and found that the "blue Black Belt" has been present in many of them. 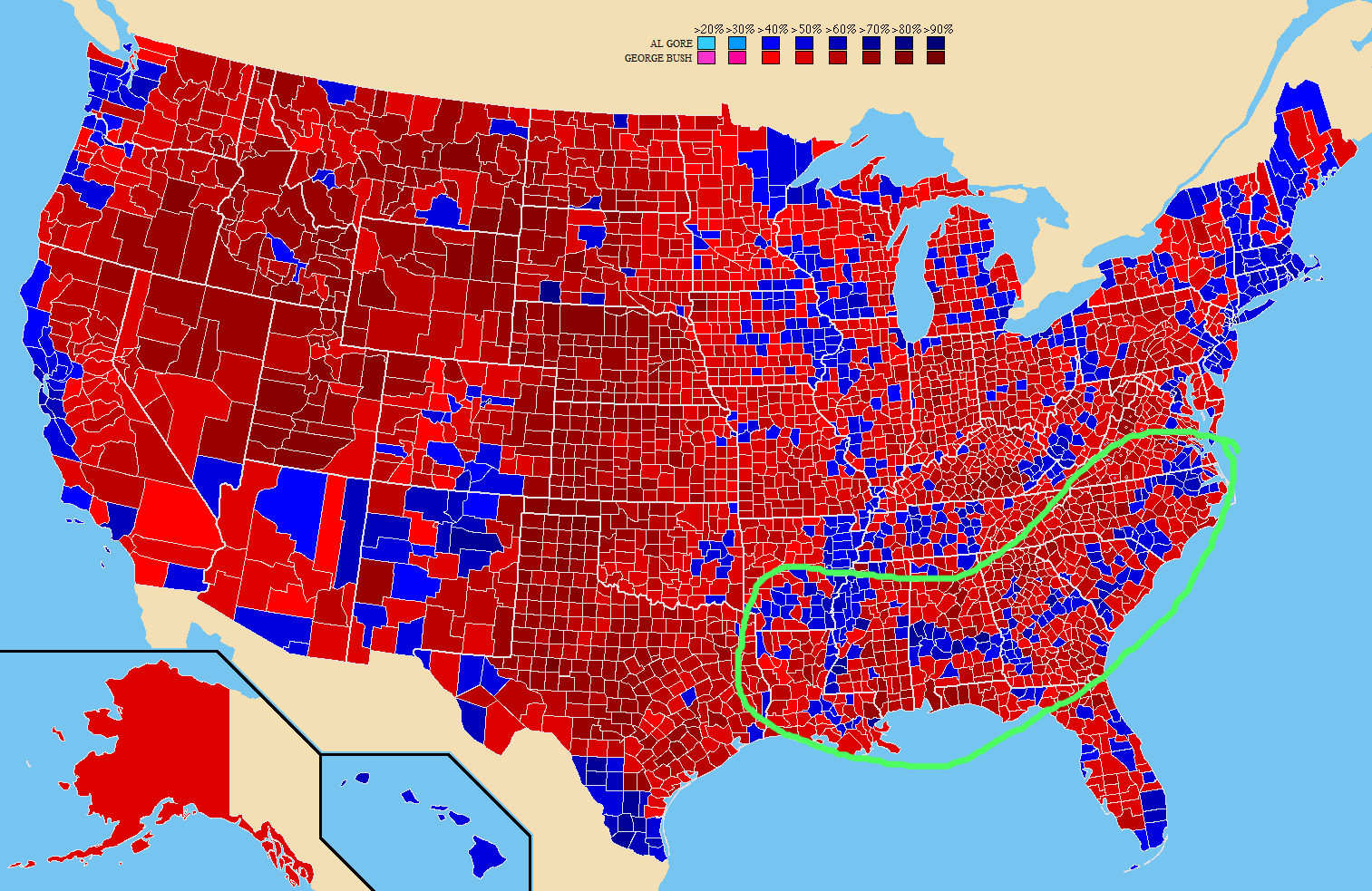 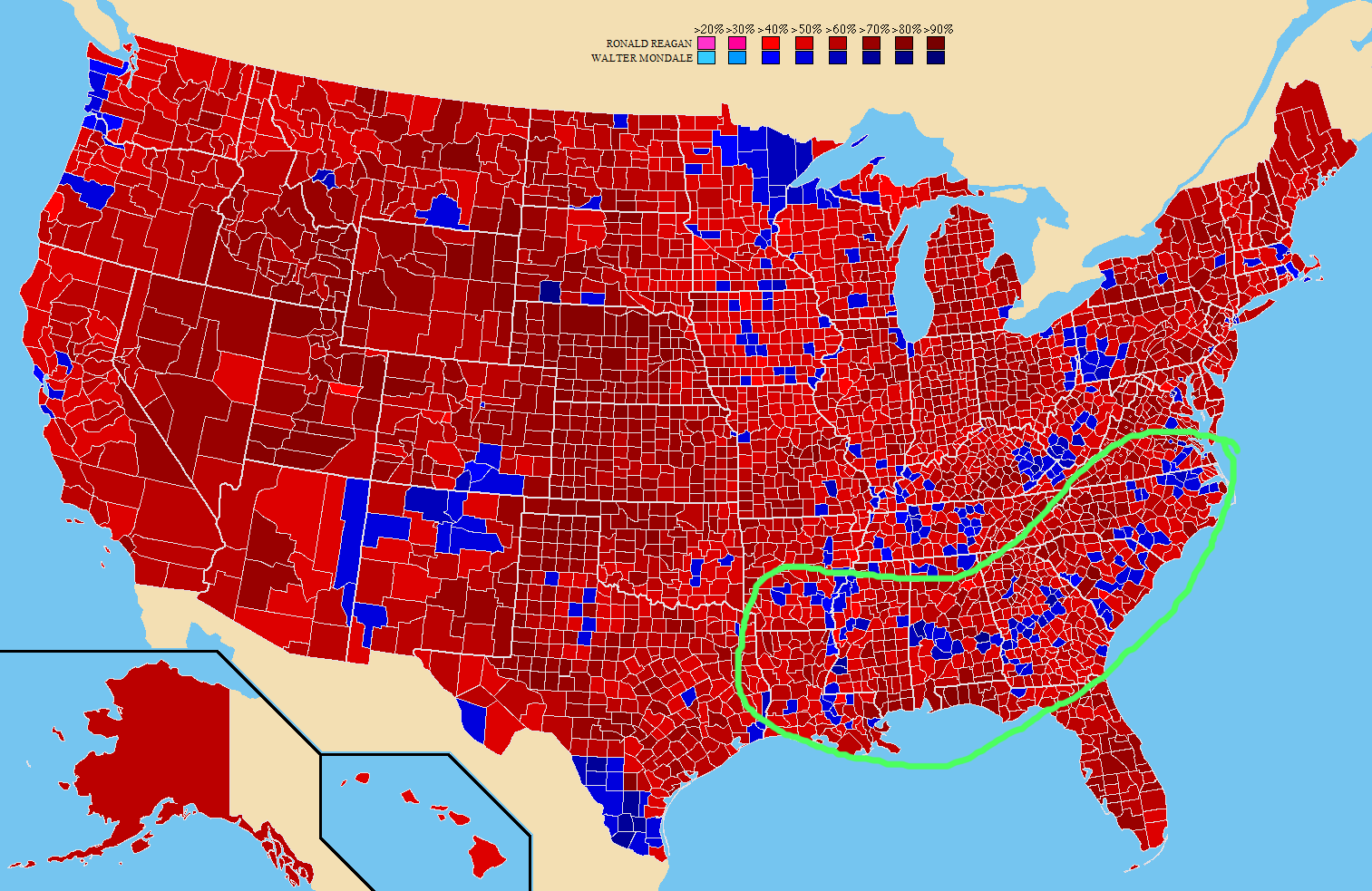 However, as you go further back, the belt disappears from maps because African-Americans often didn't (or couldn't) vote:

But the Black Belt has not always been visible on maps during elections. The Voting Rights Act, outlawing discriminatory voting practices, was passed in 1965. As result, a year earlier in the 1964 elections larger numbers of African Americans were excluded from the polls in Southern states. And, in turn, the blue band we see today was not visible.[2] 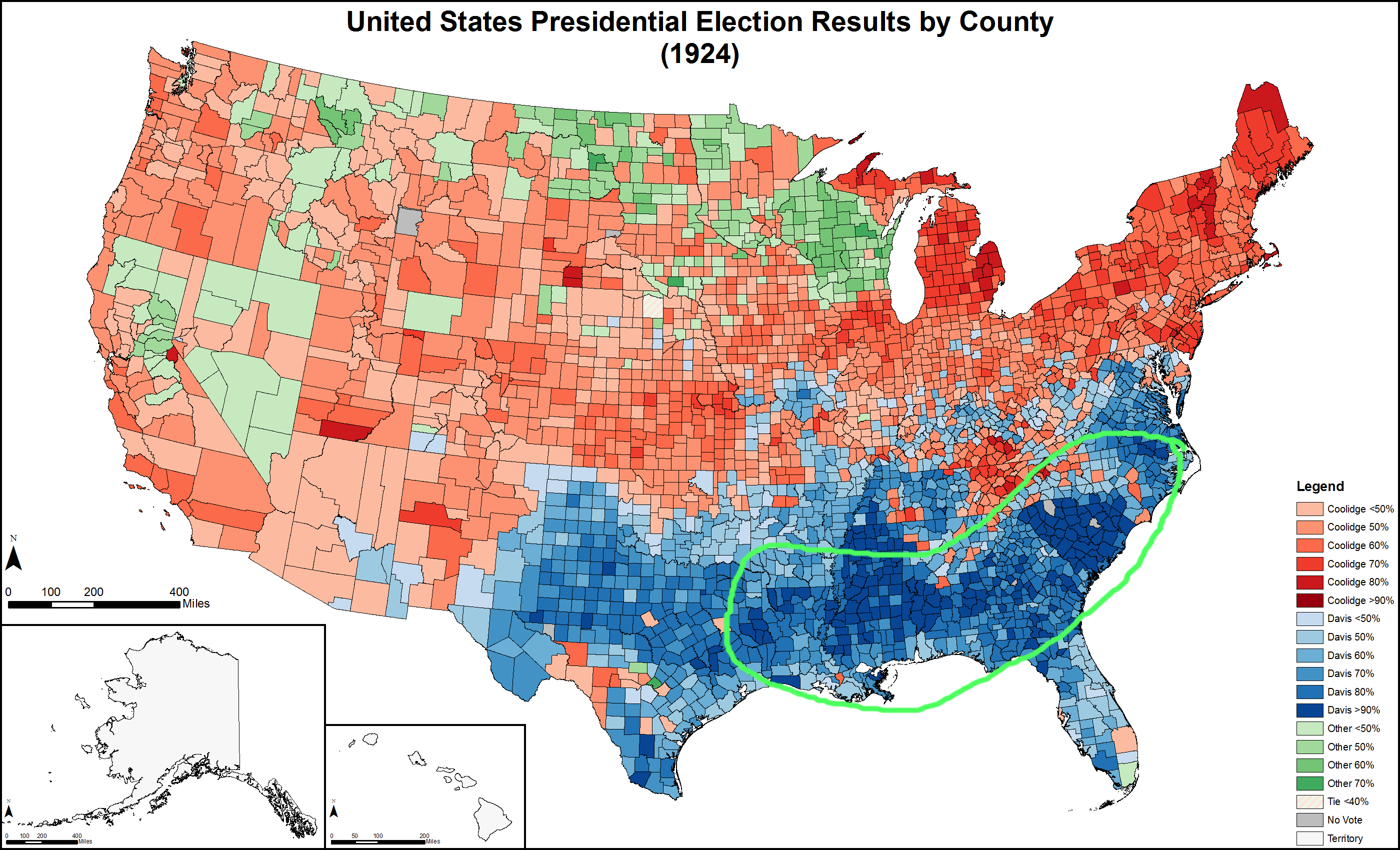 1924 elections[6], note the uniform blue color across the South (for the red/blue swap, see the Southern Realignment or the Southern strategy)

Before 1948, there was no clear distinction in party identification for African-Americans, although "at no point from 1936 on, according to Joint Center data, has the Republican candidate for president gotten more than 40 percent of the black vote."[7] 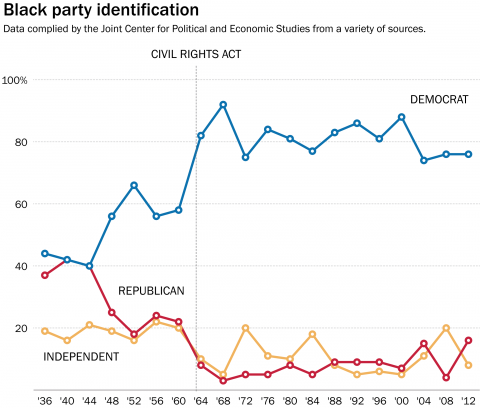 There are two major bumps in party identification: 1948 and 1964. In 1948, Democrat Harry Truman talked about civil rights in his state of the union address:

Today, however, some of our citizens are still denied equal opportunity for education, for jobs and economic advancement, and for the expression of their views at the polls. Most serious of all, some are denied equal protection under the laws. Whether discrimination is based on race, or creed, or color, or land of origin, it is utterly contrary to American ideals of democracy.[10]

This was followed by requests to Congress about, among other things, protecting the right to vote.[9]

The second bump in 1964 was the Civil Rights Act by Democrat Lyndon B. Johnson. This Act would outlaw discrimination based on race and color and "ended unequal application of voter registration requirements".

Although these two actions would strengthen the black vote for the Democratic Party, it would also make them mostly unelectable in the Deep South:

When he signed the bill, President Lyndon Johnson reportedly said that Democrats would, as a result, lose the South for a generation. It's been longer than that.[7]

The answer is likely complex in detail, but not nearly as complex on the surface as some are making it out to be.

The way voter demographics have evolved in the US has led us to a point where the democrat/republican split is almost entirely* based on urban vs rural.

Overlay a population density map and you'll see that it aligns with the 'blue line' you speak of: 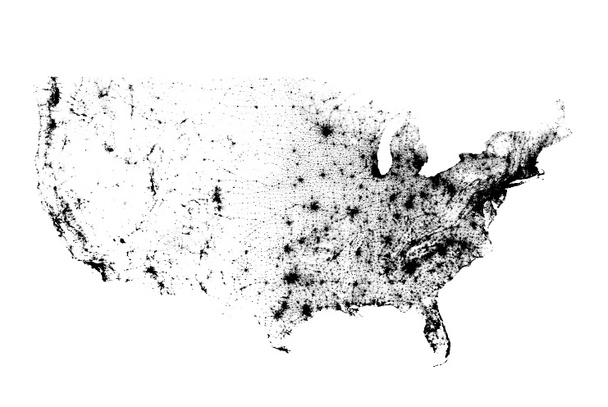 * I always like to point out the one anomaly of very northern MN and WI being consistently blue. For no other reason that it's interesting to me.

New Jersey and New York City have significant African-American populations but not high percentages. Urbanization seems a better explanation there.

So the answer to your question is that no, that line of counties does not have anything in common other than voting Democrat. Smaller segments of the line may have more in common though. For example, most of the Southern portion of the line are rural areas with mostly African-American populations. And New England is New England.

I suspect that the underlying answer is geographical. Looking at a relief map of the USA, the blue-voting line roughly seems to follow a line to the south and east of the Appalachian and Allegheny mountain ranges.

The availability of agricultural land will have affected historical patterns of settlement, in turn affecting voting patterns. I don't know enough of American history to say what the story actually was for that area, but the voting map and the relief map seem too similar for it to be a coincidence.

Adding on to Philip Klöcking's answer, which noted that certain areas had a high proportion of African-Americans, who are more likely to vote Democrat than Republican:

This is from 2007, but I suspect it'd be similar back when cotton was harvested by black slaves.

In some parts, it's definitely in line with population, the Northeast Megalopolis (DC, Baltimore, Philadelphia, NYC, Hardford, Providence, Boston, etc)

But something else that stands out to me is that the band links together the state capitals of 6 of the 7 states it passes through in the southern part (MS, AL, SC, NC, VA, MD).

33 of the 49 state capitals to have come in are democratic right now, and in general quite heavily so (may well end up being a few more when all is counted, as most western capitals are surprisingly republican so far).
Even in mostly republican states, they're some of the least red spots.

To be honest, though, it's probably still quite a bit of a chicken-egg argument, because they are generally still population centers (most of the republican capitals are the tiny ones... only OKC, Topeka, and Phoenix are fairly large capitals going republican). But it's a trend I feel I've noticed through the years.

This is a map of the "fall line", where colonial-era river transport had to transfer to other means of transport. Most of the major cities in East Coast states are along the fall line. (Cities tend to grow where transport is interrupted, especially in places that are just upstream of high-malaria regions with rich farmland.)

It's geology, which affects voting patterns more than you might think. In this particular case, your line was coastline about 100 million years ago, which has given it a geology that makes its soil especially fertile, so it was the favoured place to grow cotton, which means it was the favoured place to import slaves, whose descendants are still there and voting Democrat. See here for more details.

the ancient north american shoreline made that area super arable, which caused cotton picking to be super common there, which in turn turned it into a democract strip from all the freed slaves

Geology. Best to leave it as the 'fall line', as Mike Scott maintains. Not only did cargo transfer from water to road at this line, dramatically, this is where rivers fell, from the piedmont to the tidewater region. These are the water falls that provided power for industrialization in colonial America thru the civil war. Every river on this line has a small city and attendant road hub. The roads, manufacturing, distribution centers, and population stayed. Pretty country.

0
What do these regions, that voted for the Democratic party in the 2016 election, have in common?

6
Was Ted Cruz the only 2016 Republican candidate who's completely against government subsidies for private companies?
24
When and why did the American Republican Party become widely supported in the South?
2
When is each US state likely to declare its result in the 2016 US presidential election?
0
What do these regions, that voted for the Democratic party in the 2016 election, have in common?
1
What percent of counties that voted Democratic in 2016 are minority majority?
6
Which party actually caused the 2016 presidential election swing?
7
Why are Colorado and New Mexico "bluer" than surrounding states?
0
Does this image represent interstate migration?