Explanations for the large rebound in EU-Russia trade in 2017? 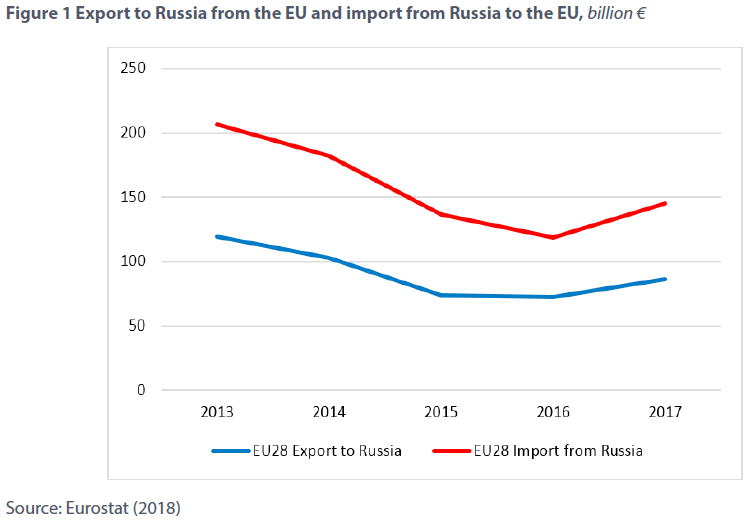 The source isn't really providing much insight why this rebound took place. As far as I know sanctions weren't dropped...

Throughout 2017 and 2018, the EU extended sanctions every six months against Russia, adding six entities involved in the construction of the bridge over the Kerch Strait between Russia and the Crimean Peninsula

So what explains the large rebound?

A German article assigned some of the rebound to the 2018 World Cup preparations, but it seems a little simplistic. The article from which I quoted the bit on sanction extension/maintenance does mentions some Italy-Russia deals on energy (Enel-Rosseti) being signed in this period, but it's unclear to me if these had any trade effect during 2017. 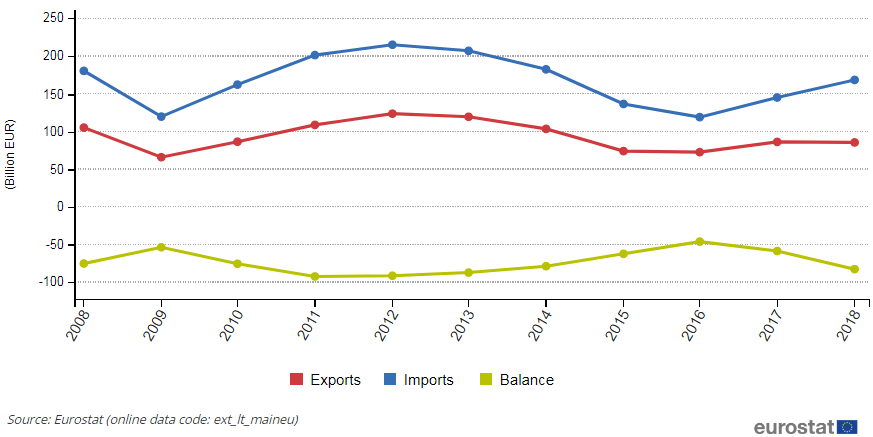 One reasonable explanation would be that the rise corresponds to a simple correction after an excessively large decline. However, there is another reason:

The image shows the development of Brent oil prices in about the same period. Source: TradingEconomics

Russian export volume is highly correlated with oil prices. And imports grow/decline with exports -even though not necessarily with each trading partner or without time lag.

P.S.: There is another good answer by @MaksimKhaitovich. However, I do not completely agree:

Your question has several parts inside of it.

1) General growth of trade is happening due to acceleration of Russian economy growth. Basically, the economy has adapted and is now much more robust than before - hence the growth.

2) More specifically, trade with EU has two components - export from Russia and import into Russia from EU.

Export Russia exports a lot of natural resources, especially energy-related. We export gas (including LNG), oil and its subproducts, coal, electricity, nuclear fuel. Due to local changes EU closes a lot of nuclear plants, coal plants etc, forcing increased reliance on imported gas. Also EU is slowly losing its ability to mine gas within EU (issues with Groningen gas field, for example, force Netherlands to dramatically reduce output). All of it increases exports of gas from Russia. Price growth helps here as well.

Import Since 2014 Russia launched a set of massive national infrastructure projects - huge construction in Crimea, Nord Stream - 2, huge efforts in localization of manufacturing and IT systems etc. All of it requires to import some equipment, services and materials from EU leading to growth of import as well.

3) Effect of sanctions generally is negligible by now and mostly affects some of EU members. If you read what the sanctions actually mean: Russia blocks imports of agricultural goods from EU mostly - hence main damage is done to countries like Italy or Greece and France. Generally Russia localized most of the food production by now. But import of food from EU was negligible small anyway. EU on the other hand blocks sales of military equipment and some double-purpose technologies (which can be used in military) to Russia. If you think about it, Russia is second-largest weapon seller in the world, so effect of these sanctions is negligible as well. Some critical advanced technologies are banned for export (like composite materials) but value-wise their sales were always small.

Hope it helps. Overall, you don't need to be surprised. Politics and actual economy are two very different animals.

Not the answer you're looking for? Browse other questions tagged european-union russian-federation trade sanctions .

6
Sanctions for Russian military action in Ukraine stopping preparation for G8. Is it important for Russia?
30
Why doesn't Russia join the European Union?
6
Does the EU-Japan trade agreement include ISDS?
3
How exactly does Donald Trump's administration benefit Russia in 2017-2018?
55
Why didn't Western countries boycott the 2018 World Cup?
9
Does the EU require preferential trade within itself?
8
Would it be illegal for the UK to negotiate a trade deal with the EU while still a member?
2
Why did Russia join the World Trade Organization so late?
5
Current status of a prospective 2017 EU fining of the UK for allowing undervalued Chinese imports
1
Which laws are relevant to evaluate whether the EU might launch further sanctions against Russia in the case of Alexey Navalny?