Why is the population of post-Soviet states declining?

After the fall of the Soviet Union, many modern European states gain independence: the Baltic republics, Ukraine, Belarus.

But there is something common among nearly all of them: their populations has been declining directly from the fall of the USSR up to today: Latvia, Estonia, Lithuania, Belarus, Ukraine. The population decline in Belarus is comparatively slower, but it's still declining.

It seems strange, because most of those countries have now western economics, and are integrated into western structures: EU and WTO. What's the explanation for this?

Economic migration (temporary or more permanent) is considered the main factor. This is quite apparent in the Eastern EU countries. Note that the official EU terminology is "mobility" not migration, inside the Single Market. 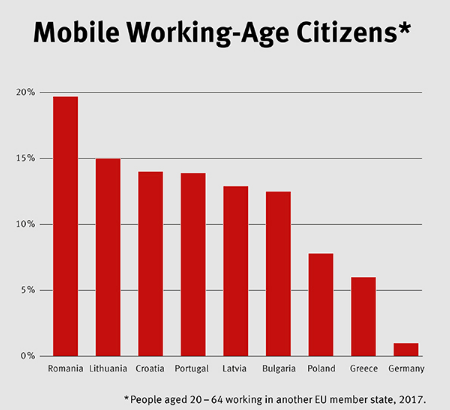 Bruegel has roughly the same info as a graph over time. 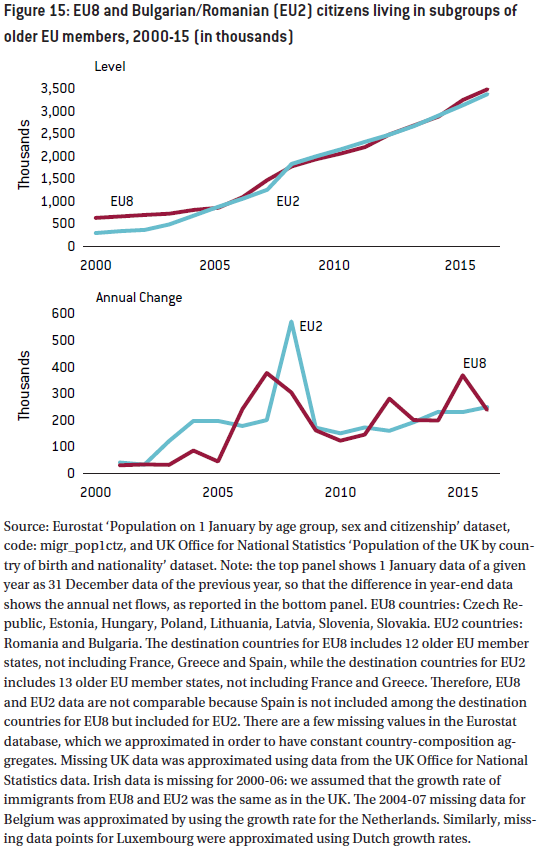 Something a bit similar happens to Ukraine's workforce, even though they're not in the EU, but in a certain partnership.

I did find some expert opinions:

Eastern Europe is set to have all but one of the world’s fastest-shrinking populations over the coming decades, according to official estimates.

The number of people in Bulgaria will tumble the quickest, says the United Nations, from 7.08 million now to 5.42m by 2050.

A swathe of other eastern European countries will suffer a similar fate: from Latvia and Lithuania in the north to Romania and Moldova further south.

Experts say falling fertility rates and economic emigration are combining to reduce the number of people in some eastern European countries.

Poland, whose population is predicted to fall by six million over the next three decades, had a fertility rate of 1.32 in 2015. It is one of the lowest levels in the European Union - only Portugal’s was smaller.

It has prompted a rather drastic — if comic — remedy: the country's health ministry released a video urging its citizens to 'breed like rabbits'.

Emigration has also played a major role in the falling populations. [...] This has especially been the case for the most-recent countries to join the EU, such as Bulgaria and Romania.

Brussels-based economic think-tank Bruegel claimed in a recent report that the population of young people in Latvia and Lithuania dropped by up to 25% between 2008-2014 as a result of emigration.

“Especially young people tend to leave, to study or work in other EU member states or even farther abroad.

The drop in fertility itself is probably correlated to that age profile of those who leave, i.e. the older people who stay probably aren't as likely to have as many children.

If that's not convincing enough, I'll try to find some studies that actually correlate depopulation with the aforementioned processes.

Some IMF researchers had a paper on this (which I found via an article in The Economist) which apportions migration effects on population growth. Alas their data only goes up to 2012 (despite the paper being published in 2016):

The scale of emigration from CESEE countries since the early 1990s has been staggering. During the past 25 years, nearly 20 million people (5½ percent of the CESEE population) are estimated to have left the region (Figure 2). By end 2012, Southeastern Europe (SEE) had experienced the largest outflows, amounting to about 16 percent of the early-1990s population. Emigration has also been persistent—annually, reaching as high as ½–1 percent of the 1990s population—and has tended to pick up following each new wave of EU expansion in 2004 (Estonia, Hungary, Latvia, Lithuania, Poland, Czech Republic, Slovak Republic and Slovenia), 2007 (Romania and Bulgaria), and 2013 (Croatia). The non-EU SEE (SEE-XEU) countries have seen easing access for their citizens for travel to Western Europe, and thus stay and work.

Emigration significantly lowered population growth in sending countries, in some cases worsening already negative demographic trends. Between 1990 and 2012, outward migration from SEE shaved off more than 8 percentage points from cumulative population growth. While these trends were partly offset by strong population growth in some CE-5 (CE-5 refers to the Czech Republic, Hungary, Poland, Slovak Republic, and Slovenia) and SEE countries, emigration has aggravated already pronounced negative demographic trends in the Baltics and some Commonwealth of Independent States (CIS) countries. As a result, local populations in most countries in the region have been stagnant or shrinking. 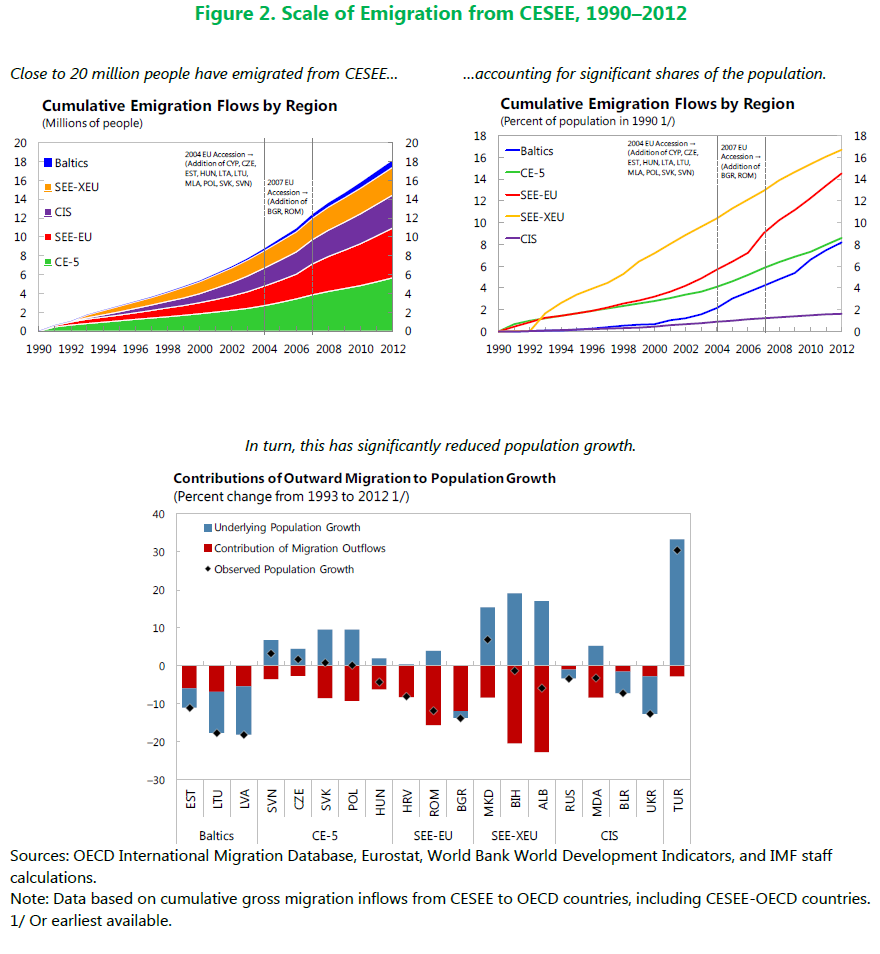 I'll preface this answer by saying that Initially I intended to gather data in support of my initial speculation: that population decline is due to economic migration. After gathering data I have decided however to keep this answer as pure data and let others provide answers based on any specific country's situation. This might be considered a "support" answer in a way.

As it turns out, not all post soviet states experience negative population growth. In fact, those which do are in minority. Those are however, the most known post soviet countries: Russia, Belorussia and Baltics.

Ukraine is the only one to experience total increase despite negative surplus of births over deaths.

Armenia is the only one to experience population decrease despite positive surplus of births.

In countries with largest population decline, decline is caused by compounding of higher mortality rate than birth rate AND negative net migration.

Median age appears to be an excellent predictor for natural population growth. For reasons why some countries have lower median age, I'd like to refrain from going further than pointing at population ageing and speculation in Fizz's answer.

As it turns out, this answer became a frame challenge answer. As for the reasons why any specific country from above list has median age it has or net migration it has, I'll leave that to other answers.

I think that the other answers miss the main point, which is not migration away from the country, but rather the lack of migration into the country. The population is decreasing practically everywhere in the western world, but in more developed countries the (economic) immigration makes up for this loss and keeps the population stable.

Almost all European countries have below-replacement birth rates - that is, less than 2 births per woman on average, assuming approximately equal numbers of each gender.

This follows an ongoing trend from the start of effective medical treatment, and particularly from the start of vaccination. When most children died before the age of 5, you had to have lots of children in order for some to have families themselves. When most children survived, you no longer had to pay the odds this way. The modem approach to child-rearing then took over, where with fewer children to take care of, parents could invest more heavily per child to give their children the best possible start. Quality over quantity, in other words.

It took time for this idea to take hold though, and the early-1800s jump in population growth is remarkable, as most children now survived. The result of course was a Malthusian crisis, and crop failures such as the Irish potato blight caused major starvation until newer farming and distribution methods allowed food supplies to catch up. The current slow decline of population in the West is actually a rebalancing towards original population levels, after this boom. Other countries around the world are on their own journeys through this demographic.

Note that the exceptions to this are places where religious rules mean contraception is not widely available. The West has almost universally taken this onboard in spite of opposition from the Catholic Church, but the malign influence of the Church's policy continues to poison attempts to normalise birth rates in poorer countries around the world.

CSIS's "Russian Roulette" podcast covered it in Episode 38: "Of Post-Soviet Demographics". The episode material was largely based on research by political scientist Judy Twigg.

There are three main drivers (A good article detailing them is "Russia’s Fraught Demographic Future" by Ilan Berman:

While this focuses on Russia proper, many of the same factors apply to entire post-soviet space, to one degree or another.

7
Is there any developed country besides Singapore with policies regarding the racial composition of the population?
16
Why do all states have equal representation in the U.S. Senate, regardless of population?
1
How is the US population growing amidst restrictive immigration policies?
76
Why did the population of Bhutan drop by 70% between 2007 and 2008?
13
In the United States, can the distribution of congressional representatives be adjusted in response to dramatic population shifts?
4
Why isn't Louisiana a swing state given its high black population?
11
Why do constitutions not incorporate a clause on population control?
2
Why has voter turnout been declining in Ukraine?
5
What measures has Russia taken to combat the declining population problem in the past 15 years?